Bodil M. Schmidt-Nielsen: ‘In Spite of It All, We Got Our Results’

Bodil M. Schmidt-Nielsen, D.D.S., Ph.D. (1918-2015), was a comparative physiologist and former MDI Biological Laboratory board president whose impact on science and administration would last for more than three decades. She was the daughter of August Krogh, a Nobel Prize-winning physiologist from the University of Copenhagen known for the “Krogh Principle,” which states that among the diversity of animal species there is one that is ideally suited for use as an experimental model for any biological problem. 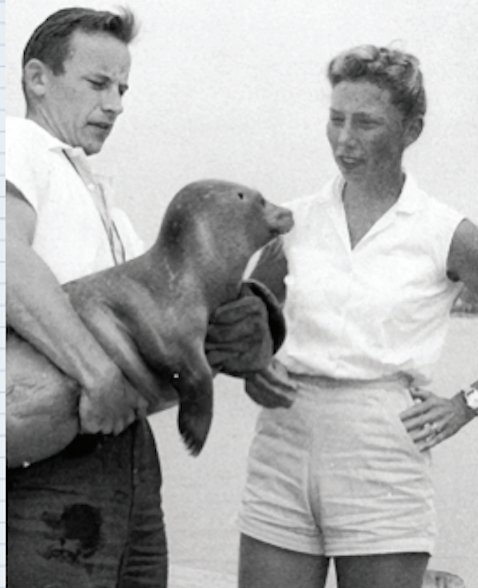 Former MDI Biological Laboratory board president Bodil M. Schmidt-Nielsen, D.D.S., Ph.D., with colleague H. Victor Murdaugh Jr., M.D., a former director of the laboratory, and a harbor seal on the dock circa 1965.

Schmidt-Nielsen – perhaps more than any other laboratory scientist – was guided by her father’s principle, which has served as a mainstay of the laboratory’s approach to research. She arrived in 1952, having been recruited by the famous kidney physiologist Homer W. Smith, D.Sc. Though she was renowned for studies with her then husband, Knut SchmidtNielsen, Ph.D., of kidney function in the kangaroo rat, which lives under arid desert conditions, her roster of animal models didn’t stop at rats. Over the years, she also used amoebas, beavers, camels, dogs, eels, fish, frogs, harbor seals, humans, insects, leeches, seagulls, sharks, sheep, skates, tadpoles and toads.

Her accounts of her collecting expeditions offer an object lesson in the determination required to secure animals in the days before supply houses. She wrote about the disappearance of a young helper in a bog during a frog collecting expedition to Witch Hole Pond (“all that was left of him [before he resurfaced] was his pack of cigarettes”), of using a long-handled mop to keep young harbor seals in the back seat of a station wagon, and of her attempts to trap beavers that kept outwitting her capture strategies. Of the latter adventure, which included a bite from an irate specimen, she wrote: “In spite of it all, we got our results and finished the work.”

During her long career, which included posts at Swarthmore, Stanford, Cincinnati, Duke, Case Western Reserve and University of Florida, she conducted studies that have had a significant impact on the understanding of human kidney function. These studies were the basis of a Bowditch Award Lecture from the American Physiological Society, for which she served as the 48th and first female president.

In 1971, she became the first permanent research scientist at the MDI Biological Laboratory. Though she closed her laboratory in 1986, she continued on as a summer visiting scientist for many years.

“For me,” she wrote, “coming to Mount Desert Island and the laboratory was love at first sight. Nothing could have appealed more to me than what I found there. The children and I could have the free access to nature that I, as a child, had enjoyed in Denmark; and at the same time I had come to a place where I could do research, learn from other scientists, and be stimulated by casual discussions through the free exchange of ideas, whether on the rocks outside the lab, at the cocktail parties or in the laboratories.”