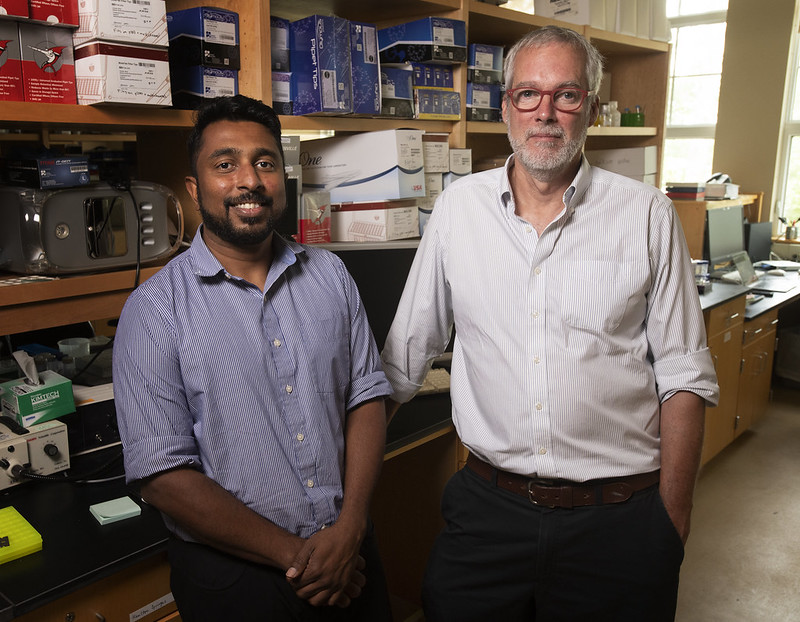 This is the third in a series of posts describing how collaborations between MDI Biological Laboratory faculty members and visiting scientists are advancing scientific progress.

Environmental toxicologist Nishad Jayasundara, Ph.D., had a problem: his team had identified potentially toxic agricultural chemicals in the drinking water of Sri Lankan farmers suffering from a mysterious kidney disease called chronic kidney disease of unknown etiology or CKDu (so named to distinguish it from the more common form of the disease). Though he suspected it was linked to toxic chemicals in drinking water, he didn’t know which, if any, of the chemicals his team had identified was the culprit.

Knowing that Ian Drummond, Ph.D., who was then at Harvard Medical School/MGH in Boston, was using the zebrafish as a model to screen for kidney disease, Jayasundara contacted him about testing water samples. Without revealing their origin, Jayasundara sent him five samples – one from a region in which CKDu was endemic and four from regions in which it was not. The sample that produced kidney dysfunction in the zebrafish model turned out to be the one from the region with the disease.

“It was like a detective story – we had the match,” said Drummond, who is now director of the MDI Biological Laboratory’s Kathryn W. Davis Center for Regenerative Biology and Aging. “Though there’s more to do, the results showed we were on track in developing a tool to identify the early signs of environmentally related kidney disease.”

“It saved us years of work – if we had even managed to figure it out,” added Jayasundara, who is now on the faculty at Duke University. A paper on their research was published last year in the journal Environment International.

The role of environmental contaminants

This past summer, Jayasundara teamed up with Drummond again on the zebrafish model. Their effort demonstrates not only the value of scientific collaboration, but also the importance of taking a holistic approach to scientific problems.

For Jayasundara, being on campus was like coming home. Introduced to the laboratory in 2003 as a student at College of the Atlantic (COA), he has returned many times, including for Maine INBRE (IDeA Network of Biomedical Research Excellence) courses. He credits the mentorship he received from faculty members and his education in human ecology at COA with launching him on a career that merges biology with his interest in the public health threat posed by CKDu in his native country.

Jayasundara’s and Drummond’s research will potentially benefit tens of thousands of Sri Lankans. In some communities, up to 20 percent of the population, including children, have displayed symptoms. It also stands to benefit those displaying similar symptoms in other areas of the world that are undergoing unprecedented warming, including Africa, Central and South America, India, the Middle East and even the United States, where CKDu has been identified in migrant farm workers.

“I don’t think we fully appreciate the role of environmental contaminants in kidney disease,” Jayasundara said. “With equatorial CKDu, we may be seeing the most severe form – a form that is exacerbated by concentrated levels of toxic compounds in drinking water, by heat stress-induced dehydration and by socioeconomic factors such as inadequate nutrition and medical care. The same thing may be happening elsewhere, but at a lower, more chronic level that may go undetected.”

Though the immediate target of the Jayasundara’s and Drummond’s research is Sri Lankan farmers, its potential benefits could be far reaching. 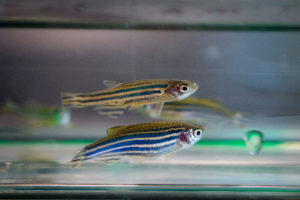 The zebrafish model also holds potential as a tool for evaluating the effects of other contaminants on kidney function, as well as for identifying the more common form of the disease, CKD, in its early stages and for testing potential pharmaceutical treatments. In Drummond’s words, it could potentially serve as a “canary in the coal mine” for CKD, a devastating, increasingly prevalent disease that represents a leading global health problem and that often goes undiagnosed until it is too late.

Jayasundara plans to continue his research with Drummond next summer. They want to refine the zebrafish as a screening tool for the early detection of kidney dysfunction and to gain a deeper understanding of the mechanisms of action underlying the negative health effects of environmental contaminants.

“We want to be able to intervene to prevent progression,” Drummond said. “That’s the main goal. If we wait until a child comes into the clinic with CKDu, we’ve missed the boat. Once we have developed the tools to identify the culprits, we can go back to the community and say, ‘These are the contaminants you need to worry about.’”

Among Germany’s nephrological academics, Franz Volhard is a 20th century figure comparable to the U.S. kidney researcher Homer Smith (himself a venerated MDIBL leader), with numerous honors given in their names. Haller has already received two previous awards named after Volhard: the 1994 Franz Volhard Prize of the German Society of Nephrology, and the 2000...