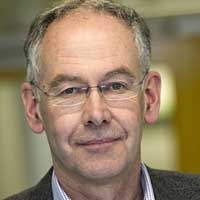 This is the first in a series of posts describing how collaborations between MDI Biological Laboratory faculty members and visiting scientists are advancing scientific progress.

Anyone who has spent time at the MDI Biological Laboratory in the summer over the last 35 years has probably seen Gert Fricker, Ph.D., a visiting scientist from the University of Heidelberg in Germany, with a graduate student or two, collecting Atlantic killifish (Fundalus heteroclitus) from Northeast Creek, a tidal estuary near the laboratory’s campus in Salisbury Cove.

Also known as a mummichog, killie, gudgeon or mud minnow, the Atlantic killifish is a tiny sliver of speckled silver that inhabits the estuaries and salt marshes of the eastern coast of North America. Most fish live in salt or fresh water and will die if removed from their habitat. But the brackish environment of the killifish has forced it to adapt to constant, rapid changes in salinity by conserving or excreting salt and fluid. This has made it a valuable model for studying the transport systems that help fulfill basic biological functions such as cellular communication, energy production and maintenance of homeostasis by absorbing, distributing and excreting chemical compounds across cell membranes. The importance of transporters in human physiology and disease is reflected by the fact they are coded for by about 10 percent of genes, according to Fricker, who is an expert on the subject.

Since it is the kidneys that do the work of cleansing the blood of toxins, transporter research at the MDI Biological Laboratory has focused on kidney transport biology, an area in which its contributions are renowned. Though Fricker first came to the laboratory as a summer visiting scientist in 1985 with the intent of studying liver transporters, his interest shifted to kidney transporters due to the mentorship of David S. Miller, Ph.D., a summer scientist at the laboratory whose career at the National Institute of Environmental Health Sciences focused on the role of transporters in protecting the body from toxic chemicals, including in the kidneys. Since his initial visit, Fricker has made the trip from Germany to Salisbury Cove most of the ensuing summers to continue his studies in the Atlantic killifish.

As a faculty member at his university’s Institute of Pharmacy and Molecular Biotechnology, Fricker’s primary interest is in the role of transporters and their relation to drug delivery. But in recent years that interest has expanded to encompass the role of transporters in kidney disease caused by exposure to heavy metals such as arsenic and cadmium. The Atlantic killifish is well suited to this research because of its ability to adapt to heavily polluted environments, which could be exploited to increase physiological resistance of human kidneys to damage from environmental toxins. Indeed, the killifish’s amazing adaptive abilities are why it became the first fish to be sent into space, where scientists demonstrated that it could learn to swim under zero gravity conditions! In his recent research, Fricker has collaborated with visiting scientist Bruce A. Stanton, Ph.D., of Dartmouth Geisel School of Medicine, who also studies the effect of arsenic on kidney transporters in the Atlantic killifish.

In another collaboration, Fricker worked in the zebrafish for the first time this past summer with Iain Drummond, Ph.D., director of the laboratory’s Kathryn W. Davis Center for Regenerative Biology and Aging. Their goal is to develop the zebrafish embryo as a fast, convenient and cost-effective model for pre-screening potential new drugs before testing them in higher vertebrates, which is more expensive and complex. And it’s likely that Fricker’s future research will employ yet another model, the African turquoise killifish (ATK), a cousin of the Atlantic killifish and the newest addition to the laboratory’s model animal roster. The ATK’s short lifespan will allow him to rapidly assess how kidney transporter function changes over the course of aging.

Fricker credits his summers at the MDI Biological Laboratory with generating data for about one third of the nearly 100 research papers he has published and with providing the setting for the training of about 20 graduate students. But if the laboratory’s emphasis on comparative biology (the comparative study of various animal models to gain insight into human health) has been the main draw of the summer visiting scientist program for him, equal billing must go to the collegiality of its scientific environment, a quality he maintains can be in scarce supply in a highly competitive academic setting.

“While my goal is to translate my findings in fish to mammals and then to humans, which is very exciting, what I like most about the lab is the open and friendly atmosphere,” he says. “That’s why I want to keep coming back as long as possible.”

Among Germany’s nephrological academics, Franz Volhard is a 20th century figure comparable to the U.S. kidney researcher Homer Smith (himself a venerated MDIBL leader), with numerous honors given in their names. Haller has already received two previous awards named after Volhard: the 1994 Franz Volhard Prize of the German Society of Nephrology, and the 2000...