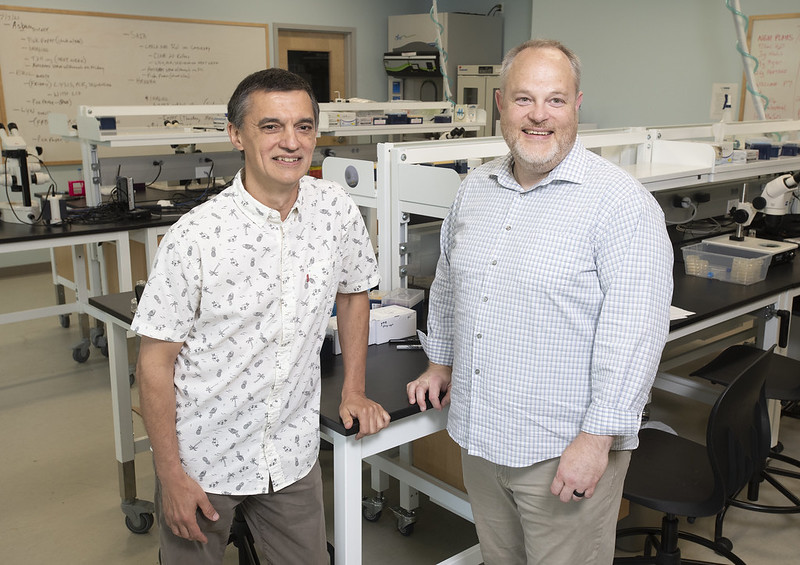 This is the second in a series of posts describing how collaborations between MDI Biological Laboratory faculty members and visiting scientists are advancing scientific progress.

Everyone is familiar with bursts of creative inspiration in which ideas are teeming, connections between disparate subjects are made and solutions to seemingly intractable problems are revealed.

But it’s rare for such moments to come out of the blue. Often, they are fostered by an inspirational setting, a culture of knowledge-sharing and the time to engage in creative thought. MDI Biological Laboratory President Hermann Haller, M.D., has sought to create just such an environment with his vision of an international science village populated by scientists, undergraduate and graduate students, and post-doctoral researchers.

And, if the experience of visiting scientist Brett Keiper, Ph.D., of East Carolina University is any indication, his strategy has more than succeeded.

Keiper has been a visiting scientist at the MDI Biological Laboratory for the past two summers, the first through a grant from the Salisbury Cove Research Foundation and most recently through a National Science Foundation Mid-Career Advancement award that will run through 2024. 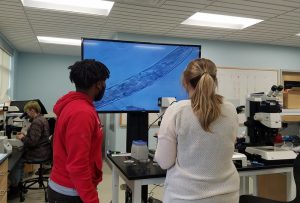 The goal of his 2021 visit was to learn new CRISPR-Cas9 gene editing methodologies for C. elegans, a tiny soil-dwelling roundworm, from MDI Biological Laboratory faculty member Dustin Updike, Ph.D. The technology allows scientists to create new genetic strains of model animals with characteristics that are of research interest, or to tag molecules under study with fluorescent proteins that are visible under a fluorescence microscope. Though Keiper and Updike have known one another professionally for nearly a decade, the program was their first opportunity to work side by side.

“Because my lab had begun to use CRISPR-Cas9, I wanted to visit Dustin’s lab to gain more insight into how it’s done well,” says Keiper, who is a faculty member in the Department of Biochemistry and Molecular Biology at ECU’s Brody School of Medicine. “Dustin is internationally known for his expertise in this area – he has it down to an art form. With the hands-on experience, I can now bring those techniques back to my lab.”

The collaboration stems from the scientists’ interest in germ cells, precursors to sperm and eggs that are important because of their ability upon fertilization to differentiate into any type of cell, a property called totipotency. Germ cells also hint at immortality since they are, in a sense, passed from generation to generation. Because mechanisms of cell differentiation are conserved across species, an increased understanding of germ cells in C. elegans could lead to treatments for birth defects, infertility and even cancer, since cancer cells also have totipotent and immortal properties.

From the standpoint of regeneration, which is the research focus at the MDI Biological Laboratory, germ cell traits offer clues on how to promote regeneration in tissues and organs lost to injury or disease by unlocking the totipotent properties of those tissues.

Updike’s research focuses on how messenger RNAs (mRNAs), which carry the genetic information for proteins, transit out of the nucleus into organelles called germ granules just outside the nucleus, while Keiper’s focuses on how mRNAs get from the germ granules to the ribosomes, where the proteins that serve important roles in growth, development and everyday functioning are manufactured.

Their mutual interest lies with the “hand-off” of genetic information from germ granules to ribosomes. “The collaboration is really about how this hand-off happens,” Keiper says. “As a result of our collaboration we’re now using some of the same tools and context, which will allow us to really find out what the handoff point is.”

From Updike’s perspective, the collaboration holds the prospect of allowing the scientists to solve problems they wouldn’t have been able to solve on their own.

The summer program is also yielding longer-term benefits. The approach has already produced one collaborative NSF grant, and future plans will feature the exchange of graduate students and post-doctoral researchers. In addition, a graduate student in Keiper’s laboratory is currently pursuing research begun in Updike’s laboratory on the role of the “Vasa” protein in influencing mRNA translation to protein.

The visiting scientist program has also given Keiper the chance to trade ideas and knowledge with other MDI Biological Laboratory scientists, including Jarod Rollins, Ph.D., who also studies C. elegans ribosomes; members of Haller’s laboratory who study kidney regeneration in the zebrafish and African turquoise killifish; Joel H. Graber, Ph.D., who has expertise in mRNA bioinformatics; and others.

“As a visiting scientist, I have more time and freedom to pull aside other people or be pulled aside and just talk about science,” Keiper says. “Though I interact with a lot of scientists at the university, they tend to be the same people. When I am at the MDI Biological Laboratory, I am making connections and finding common interests with a whole new community of scientists. It allows me to break out of my little bubble.”

But the biggest benefit of Keiper’s summers at the laboratory may simply be the opportunity for creative time away from administrative responsibilities.

“I deal with a lot of administrative distraction,” Keiper says of his various roles at the university. “When I’m in Maine, I put all of that aside. The ability to focus without distractions really does inspire new ideas and research directions.”

A Busy First Year at MDI Bioscience, Capped by Support from Capitol Hill

It’s been almost a year since MDIBL announced the formation of MDI Bioscience, a new Laboratory initiative focused on using non-mammalian models for human health, such as zebrafish and C. elegans roundworms, in early-stage drug discovery and development.