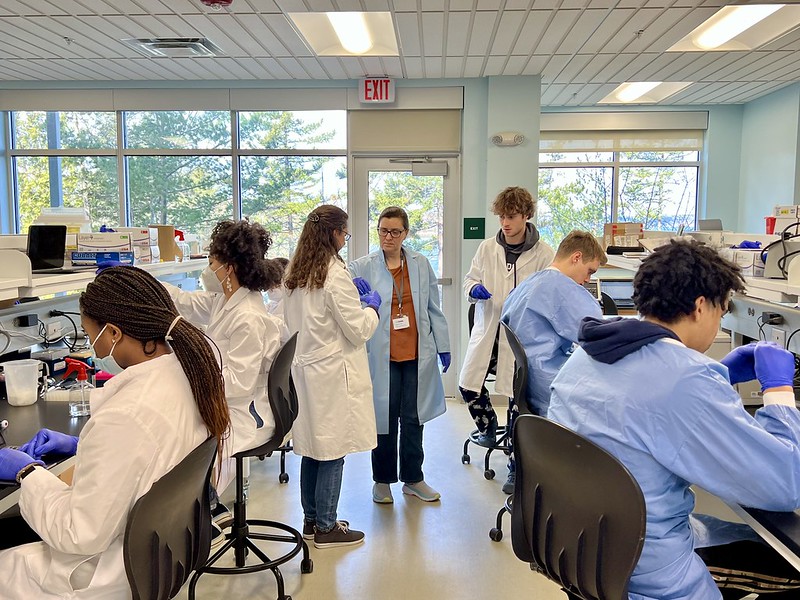 The Maine INBRE in its 22nd Year – Looking Back and Ahead

As the Maine IDeA Network of Biomedical Research Excellence (ME-INBRE) enters its 22nd year (and the fourth of the current five-year funding cycle) it is exciting to reflect on what we’ve accomplished and how we are positioned to further augment and expand biomedical research excellence in Maine. This National Institutes of Health (NIGMS) funded Institutional Development Award (IDeA) program began in 2001 as the Maine Biomedical Research Infrastructure Network (BRIN), becoming ME-INBRE in 2004. Since its inception the network has grown from nine to 14 institutions , which in addition to the MDI Biological Laboratory (lead institution), includes three other research institutions (The Jackson Laboratory, The University of Maine, and University of New England), and ten undergraduate institutions (Bates, Bowdoin, and Colby Colleges, Southern Maine Community College, College of the Atlantic, the University of Maine Honors College, and UMaine campuses at Farmington, Machias, Presque Isle, and Fort Kent).

The overarching goal of the ME-INBRE is to develop Maine’s capacity for cutting-edge biomedical research by providing scientific and administrative leadership, research resources (such as seed funding, state-of-the-art technological/computational infrastructure and technical expertise), training and mentoring, and programs that foster productive collaboration between Maine’s many talented but geographically spread out biomedical scientists and students. Maine has seen vigorous growth of biomedical research and development over the past decade. Substantial increases in faculty recruitment, NIH funding levels and the number of research publications attests to INBRE’s success in achieving that goal. In this post I will highlight what’s been happening with some of our recent initiatives and give a peek into what we are looking to do in coming years. 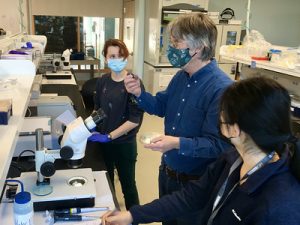 The scientific theme of the ME-INBRE is comparative functional genomics, a research approach that queries genomic sequence and expression data from different species under different conditions to gain insight into how genetic information underpins biological function. Our Bioinformatics Core plays a crucial role in facilitating that approach and has been a leader in developing the capacity for comparative analysis of genomics sequence data. This past year the Core, under the leadership of co-director Benjamin King, Ph.D. (Associate Professor at UMaine), obtained a supplement to the ME-INBRE grant to develop resources for Cloud computing. The project, entitled “A Community of Practice for Reusable Cloud-Based Bioinformatics Analysis Environments to Enhance Data Science Research and Training”, will create reusable Cloud-based bioinformatics workflows for genome-wide analysis of gene activity, and provide reusable training material on how to use those workflows. The outcome will be to significantly lower the barrier to research in comparative functional genomics, by allowing anyone with a laptop or desktop computer and a good internet connection to do large-scale data analyses that would otherwise require access to a high-performance computing cluster. A second Cloud computing project is being developed by Core co-director Joel Graber, Ph.D. (Director of Computational Biology at MDIBL), entitled “A Cloud and Container-based Training Module on Transcriptome Assembly, Refinement, and Analysis”, which will convert training materials developed in a workshop that the Core has run over the past three years into reusable self-training modules that are freely accessible via the internet.

Microscopy is a foundational technology for discovering biological function. A major ME-INBRE initiative has been to develop the state’s capacity for light microscopy and biological imaging.  The MDI Biological Laboratory and ME-INBRE have invested in developing the Light Microscopy Facility (LMF), by hiring Frederic Bonnet, Ph.D. (Microscopist and ME-INBRE Research Resources Manager) to manage the LMF and oversee significant upgrading of the equipment, including the purchase of a state-of-the-art Zeiss LSM980 confocal microscope system with high resolution Airy Scan as well as multiphoton technology (Maine’s first). The MDIBL LMF is available to the entire ME-INBRE network, and to increase accessibility Dr. Bonnett has developed a Remote Interaction Program, in which researchers at any ME-INBRE institution can ship their specimens to MDIBL, then collaborate with LMF staff in real time via the internet to image the samples on one of the LMF microscopes. Other initiatives headed up by Dr. Bonnett include an easy-to-use LMF booking system, a new Maine Microscopy Course co-organized with faculty at UMaine that will be launched at MDIBL this summer, and connecting researchers throughout Maine via a microscopy user’s group that meets monthly on Zoom to discuss best practices, technological advances, and research results. 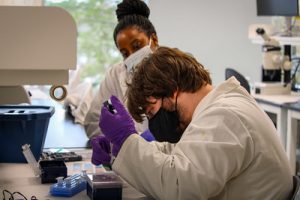 Looking ahead, a major challenge for ME-INBRE, and for biomedical science in general, is learning to deal with and take advantage of the data explosion unleashed by advanced technologies such as high throughput sequencing and digital imaging. Over the past two decades biomedical research has transitioned from a science limited by the ability to generate (and hence the availability of) new data, to a science limited by the ability to analyze and interpret the vast amounts of already available data. The data explosion presents new opportunities, for example, for research based entirely on analysis of pre-existing, publicly available datasets. The ME-INBRE is working toward meeting that challenge by way of increased collaboration between Maine institutions, scientists, and students, in the spirit of developing new paradigms for team science.

In the next funding cycle, the ME-INBRE Bioinformatics Core will become the Data Science Core for Biomedical Research, as mandated by the NIGMS and in line with the NIH strategic plan for Data Science. ME-INBRE will increasingly support scientists from fields outside of those traditionally associated with biomedicine, for example, computer scientists and statisticians, and focus on developing collaborative, multidisciplinary projects. This month, the ME-INBRE Steering Committee, will have a retreat to discuss ways to further augment inter-institutional cross-network collaboration to address these emerging challenges.

In addition, ME-INBRE has worked to catalyze increased collaboration between all the Maine NIGMS-IDeA (Institutional Development Award) programs [Centers of Biomedical Research Excellence (COBREs) and Center for Translational Research (CTR)], organizing quarterly meetings between the program directors to discuss ways to facilitate collaboration in research and research training, and sharing of resources and best practices.

Finally, ME-INBRE is working with other collaborative biomedical research and education programs and organizations in Maine, including the UMaine Graduate School of Biomedical Science and Engineering (GSBSE), the UMaine Institute of Medicine, the Roux Institute, the Bioscience Association of Maine (BioME), and the Science Education Partnership Award (SEPA) programs at MDIBL and The Jackson Laboratory, to enhance connectivity and collaboration across the Maine biomedical research and development landscape. 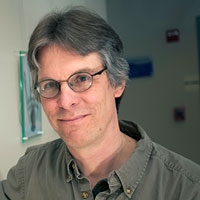 I am proud and thankful to be part of this transformative program that provides talented biomedical researchers and students in Maine access to exciting opportunities that would not otherwise exist in the state, and excited to continue working to develop those opportunities to their full potential. The best way that I can sum it up is by tying it to one of the central missions of the NIGMS INBRE program, which is to build research capacity in IDeA states by fostering undergraduate student participation in biomedical research projects led by talented faculty investigators.

I’ve had the pleasure of working with many Maine undergraduate researchers over the past decade and a half, and it is a joy watching them go on to higher degrees and/or careers in biomedical science, quite often here in Maine. It brings me a good deal of hope watching students light up, dig in and engage with (often for the first time!) research that addresses important unanswered questions relevant to bettering human health and well-being, through our short course and mentored research fellowships opportunities.

Courses Already in Full Swing for 2022

Summer of Fun and Futures: Life in the Haller Lab

Keagan Dunbar and Alyssa Kent are rising seniors, spending their summer in the Haller Lab. Although only half-way through their time on campus, both already say they know it’s an experience of a lifetime. “I’m really happy here,” smiles Keagan, “I’ve learned so much more about the breadth of biomedical sciences and I know my...