The Art of Diagnosis: Recognizing Disease in Paintings

The following post is by MDI Biological Laboratory faculty member Hermann Haller, M.D. Dr. Haller, professor and director of the Department of Nephrology and Hypertension at Hannover Medical School in Hanover, Germany, lectures frequently on the interface between art and medicine.

The art of observation — or the art of making a diagnosis, as it may be called — has been an important topic in the education of doctors and scientists for a long time. To look carefully and to draw conclusions from observations made in patients and in the laboratory is something that takes a long time to learn. The same is true of looking through the microscope or analyzing electron microscopy images. 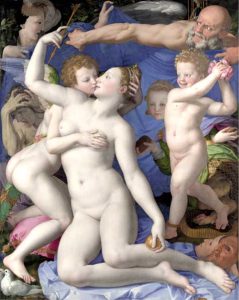 of years ago, professors at Harvard and at Yale started teaching the art of diagnosis by studying paintings with their students. A close, skillful analysis of a painting helps students gain experience in observation and in the description of the observed. Furthermore, some paintings actually display human diseases. Realistic portrayals of pathological features are especially common in Renaissance paintings from the 14th and 15th centuries. Since realism was important in paintings from the Renaissance era through the end of the 19th century, one can use paintings to make diagnoses. The analysis of these paintings not only provides us with insights into the history of a disease, it also provides a historical perspective on the era and on the painter.

I have used this approach in seminars and lectures for some years. In this post, I’d like to discuss a painting from from 1545 by the Florentine painter Agnolo Bronzino, “Allegory of Love.” Originally painted for the king of France, Francis I (1494-1547), for his château in Fontainebleau, it is now on display in the National Gallery in London, where it is one of the collection’s most prized artworks.

Looking at the painting, one first sees a nude woman embraced by a boy. The woman is Venus and the young man her son, Cupid. At the right, Cupid throws roses on the amorous scene. The bodies are painted in a cool, shining white. In comparison, the background of the painting is more static. On the right, the strong arm of an old man — Father Time — unveils the scene. On the left is a person in agony and on the right a masked figure. On the right is also a beautiful young woman whose distorted arms and malformed animal legs are visible under her skirt.

What’s the significance of this mixture of eroticism and disease?

In 1493, the first outbreak of venereal disease, i.e., syphilis, was reported in Spain (the term venereal comes from Venus, the goddess of love). The disease, which is caused by a bacterium in the spirochete family, Treponema pallidum, later broke out among the soldiers of Charles VIII of France when he invaded Naples during the First Italian War. Within a couple of years, it had spread throughout Europe. In the 15th century, it was far more virulent than it is today, first causing a painless ulcer, then spreading to the various organs. By the 16th century, it was widespread. We can compare it to the HIV epidemic in the western world 30 years ago. Popes, bishops and kings, as well as common people, were afflicted and died. 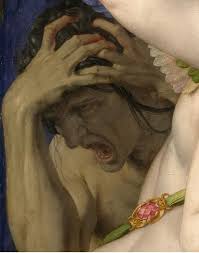 The science and scientific literature in the 1490s were quite impressive. Medical publications on the disease were numerous. Within three years of the outbreak, several publications — mostly in Latin, but published in Spain, Italy and Germany — had described the disease and proposed diagnostic and therapeutic strategies. Within 20 years, it was well documented. Several therapeutic treatments were applied. The most common was mercury, which was applied as an ointment, inhaled as a vapor or swallowed. An alternative was a decoction of guaiacum, or holy wood, an herb made from the bark of guaiac tree from the Caribbean and South America. These treatments were supported by different medical authorities. The monopoly on the guaiacum treatment was granted by Holy Roman Emperor Charles V (1500 to 1558) to the wealthy and influential Fugger family of Augsburg, which actively suppressed the publication of books on the mercury treatment. Even in the 16th century, the strategies used by today’s pharmaceutical companies were well understood!

The “Allegory of Love” is a very good example of how close observation can not only lead to a better understanding of a painting, but also provide insight into the medical practices and scientific understanding of the diseases of the time.