Staying on in Maine: MDI Biological Laboratory Research Assistants Talk About the Value of Working in Their Home State

The MDI Biological Laboratory is the leader of Maine INBRE, a statewide biomedical and research and training network of 13 Maine education and research institutions. Since the federally funded program’s founding in 2001, the MDI Biological Laboratory has provided biomedical training to more than 2,100 Maine students. In recognition that biomedical training has to go hand-in-hand with job creation, we are now building on our legacy of leadership in science training with the new Maine Center for Biomedical Innovation, whose goal is to to drive the creation of 21st century jobs in science and technology by catalyzing innovation and by supporting a culture of entrepreneurship. In this post, research assistants at the MDI Biological Laboratory talk about about how Maine INBRE helped foster their careers, and about what the opportunity to work in biomedical research in their home state means to them.

Though many Maine science graduates are tempted to move out of state by city lights, a range of job opportunities and more temperate climates, that wasn’t the case for him, Jesse Rochester says.

“It’s hard to move away,” says Rochester, who grew up in Presque Isle, a small town in northern Maine. The 2016 University of Maine at Fort Kent (UMFK) graduate, who works as a research assistant in the laboratory of MDI Biological Laboratory assistant professor Dustin Updike, Ph.D., was attracted by Maine’s small, tight-knit research community; the opportunity to remain near his family; and the opportunity to work with Updike, whom he originally met in a week-long Maine INBRE course at the MDI Biological Laboratory and whom he describes as a “great mentor.”

Rochester, 22, credits his interest in biology to his father, a district forester for the Maine Forest Service. Though Jesse has worked in forestry as well, his academic interests lay more with the plants on the forest floor than with the trees overhead. Specifically, he was interested in an endangered perennial herb called Furbish’s lousewort found only on the banks of the St. John River, which forms the border between Maine and Canada, and that is genetically linked to a plant growing in Washington State. His quest to find out how Furbish’s lousewort, which was at one point thought to be extinct, ended up in Maine led to an interest in plant genetics, which in turn prompted his participation in a week-long Maine INBRE course in genetics at the MDI Biological Laboratory led by Updike. When a full-time position in Updike’s lab became available following graduation, Rochester jumped on the opportunity. He had also been offered a job doing forestry data collection in Idaho, but he was attracted by the continuing opportunity to learn offered by the position at the MDI Biological Laboratory. He is planning to apply to a doctoral program at the University of Maine’s Graduate School of Biomedical Science and Engineering (GSBSE) in which he would continue to work under Updike conducting research in the roundworm, C. elegans, a popular animal model in genetic research that shares many of its genes with humans.

Rochester’s experience in the Maine INBRE course at the MDI Biological Laboratory was critical to his decision to pursue graduate studies in science. He chose to attend the University of Maine at Fort Kent because of its biathlon program, a winter sport that combines cross-country skiing and rifle marksmanship, and its low tuition. Though he is grateful for the opportunity to graduate with little student debt afforded by the low tuition and a state program that reimburses student loans for STEM (science, technology, engineering and math) graduates who stay in Maine, the downside was that the university lacked many of the scientific resources he needed to pursue his research interests. Indeed, Rochester says he was one of the few UMFK students conducting research in the biology program, which is focused on applied biomedical sciences such as nursing. Through Maine INBRE, he gained hands-on experience in genetics research techniques and methods that wasn’t available at his home institution, developed the contacts that landed him a great entry-level position and found a valuable mentor to guide him on his career path. As for what’s next: He’s not sure. “I’m lucky,” he says. “Things seem to work out for me. Whatever door opens next, I just go through it.” 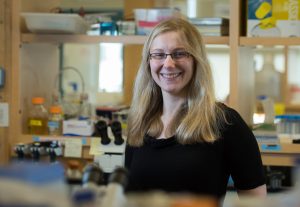 Maine’s lifestyle is often cited as a major attraction of living in the Pine Tree State. For Catherine Sharp, that lifestyle extends to the tapestry of connections that led to her job as a research assistant in the laboratory of MDI Biological Laboratory assistant professor Dustin Updike, Ph.D. As a resident of Somesville who attended Mount Desert Island schools, Sharp was familiar with the MDI Biological Laboratory and the Jackson Laboratory, where she worked as an intern during high school and college. But her connection with the MDI Biological Laboratory was strengthened by her relationship with her biology professor at Colby College in Waterville, Andrea R. Tilden, Ph.D., who is the Colby co-director of the MDI Biological Laboratory-led Maine INBRE program. When Sharp saw a post for a position in Updike’s laboratory on a Bar Harbor employment site following her graduation in 2016, she knew she would apply. She had been searching for work in the sciences in Maine for several months, and wasn’t eager to join the stampede of science graduates competing for entry-level research jobs in Boston. “There’s an amazing closeness to the research community in Maine,” she says. “The overlaps made a web of perfect events that led to my getting this job.”

The Maine INBRE program, along with a state program that reimburses student loans for STEM graduates who stay in Maine, alleviates the “brain drain” to other states by providing Maine graduates with options they wouldn’t otherwise have, Sharp says. “The default position for Maine science graduates is that they have to move out of state to get a job,” she says. “I feel very fortunate that I have a job at the MDI Biological Laboratory, and that I’m able to live where I love; it’s nice not to have to uproot your life to get a job doing what you want to do.” She also believes the research experience on her home turf is giving her the intellectual and emotional space to prepare for the next step in her career. “It’s given me an edge for later,” she says. “Starting out in Boston or another city would have been really hard — intense and competitive and isolating. By staying here, I’m developing the resources in terms of time, experience and participation in a larger scientific community to do well later on.” And what is that later on? Sharp, 24, doesn’t know yet, though she does plan to attend graduate school. She believes her experience as a research assistant will give her a leg up in the application process. One lesson she’s learned from her research experience is that careers often don’t unfold as planned — that responding to what interests you and being open to opportunities as they arise are as important in building a career as they are in scientific research. 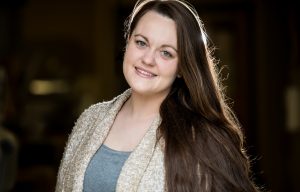 Santina Snow grew up in heavy construction. Her father and mother own separate construction companies. While her classmates were playing with Tonka trucks, she was operating the real thing. She might have followed her brother into the family business, but instead she chose biology, which has fascinated her for as long as she can remember. She still remembers the day in sixth grade when the class dissected a starfish, a squid and a perch. “The other kids were grossed out,” she says. “But I was intrigued by all the different parts.” Her introduction to the inner workings of the cell came in a high school advanced placement biology class. If anatomy had intrigued her, she was hooked by cellular and molecular biology. She went on to major in biological chemistry at Bates College in Lewiston. “I knew I wanted to study the molecular aspect,” she says. At Bates, she participated in a five-week Maine INBRE course that included two weeks at the MDI Biological Laboratory, her introduction to the institution that would become her first employer in her field. Today, Snow studies the molecular mechanisms underlying aging as a research assistant in the laboratory of MDI Biological Laboratory assistant professor Aric Rogers, Ph.D.

When Snow, 25, was struggling to find a job following graduation, her Bates advisor, Paula J. Schlax, Ph.D., whose research is supported by the Maine INBRE program, invited her to present a poster on her research on Lyme disease at an MDI Biological Laboratory event celebrating the Maine INBRE program. When Snow learned at that event that Rogers was looking for a research assistant, she didn’t miss a beat. She had submitted 55 online applications for jobs in Providence and Boston and received only two or three replies. She hadn’t been planning to stay in Maine, she says, but she’s glad she did. “My friends went to Boston,” she quips. “I went to Bar Harbor.” Her experience at the MDI Biological Laboratory has presented her with opportunities she would never have had in a big city, she says. She’s been given the freedom to express her ideas and the flexibility to direct her research — even the opportunity to be first author on a research paper. “My friends who are research assistants in Boston don’t have the same freedom,” she says. She believes these opportunities will give her a leg up when she applies to graduate school in the fall.

Snow views Maine INBRE and other programs that help Maine science students stay in the state as an important investment. “If Maine’s taxpayers are pouring money into their educational systems, they should be getting a return on their investment, which won’t happen if science graduates are forced to leave the state to find jobs,” she says. She’s quick to note, however, that as important as modernizing its workforce is to Maine’s economy, it’s also important not to lose sight of the importance of the “blue collar” economy where her roots lie. “We can’t devalue the traditional jobs in construction, forestry and fishing that have been the mainstay of Maine’s economy for so many years,” she says. “Both have their place.” Snow is applying for a doctoral program in mammalian genetics at Tufts University’s Sackler School of Graduate Biomedical Sciences in downtown Boston. But the program will eventually bring the Pittston native back to her home state through JAX Track, a collaborative program with The Jackson Laboratory in Bar Harbor. As a rural Mainer, Snow has Maine soil in her blood. “I would love to buy land in the area and put down roots,” she says. “The apartment life is not for me.”

The MDI Biological Laboratory’s research and education capacity leapt forward in 2022 with expansion of our graduate programs.