HomeNewsPress Releases‘Too Creative for Science?’ to Be Topic of Aug. 21 MDI Science Café 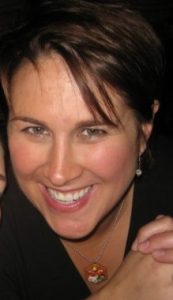 BAR HARBOR, MAINE – Have you ever wondered what it’s like to grow up in a family of artists, then end up a scientist? What does thinking like an artist offer the scientist? Can the blending of art and science encourage a more diverse population of students to pursue science, and improve the public understanding of science?

Artist and scientist Ahna R. Skop, Ph.D., will provide a glimpse into how she has impacted science, education and the public with her passions for art and science at an MDI Science Café to be held at 5 p.m., on Monday, Aug. 21, at the Maine Center for Biomedical Innovation on the Bar Harbor campus of the MDI Biological Laboratory.

Skop describes herself as a scientist by day and an artist by night. In her scientific life, she is an associate professor in the Department of Genetics at the University of Wisconsin-Madison, where she studies cell division in the roundworm, C. elegans. In her artistic life, she is “an avid foodie, baker and cook.”

In her talk, she will describe the interface between these worlds, which was recently symbolized on her blog site, Foodskop, by a photo of a “cell division cake,” which takes the form of a mitotic cell in the process of dividing. The cytoplasm is described as “a coffee-infused, peanut butter buttercream and ganache topped cake,” with the “DNA depicted in blue, microtubules in green and midbody proteins in red.”

Indeed, Skop — one of whose mantras is “Never trust a scientist who can’t cook —  believes that being a scientist is really cooking at the lab bench with chemicals. “Cooking is really home chemistry,” she says on the blog, “If you can follow a recipe and be creative, you can be a scientist.” The question “Can you cook?” is a standard for interviewees for research positions in her laboratory.

Skop’s artistic side extends to more than food, however. She is the founder and curator of the popular biennial Worm Art Show, a highlight of the International C. elegans Conference that celebrated its 20th anniversary in June. Entries range from nematode embroideries to nematode iPhone art; there’s even a “C. elegans for social justice” category for “worm art that inspires awareness of the biggest issues of our time.”

Skop’s interest in science was inspired by microscopy, which she describes as the bridge between art and science. She uses the creative and visual nature of science to inspire her students to an increased appreciation of structures that were once hidden from view. She has been a judge for microscopy image contests, and a microscopic image she took was once featured on the cover of Science magazine.

“When I see an image I love, I know the second I see it. I know it because it is beautiful,” she said in an article on a university Cool Science Image contest for which she served as a judge. “My father was a sculptor and my mother a ceramicist and art teacher. All of my brothers and sisters are artists, yet I ended up a scientist,” she says. “I always tell people that genetically I’m an artist. But there is no difference between the two.”

The cafés are sponsored by Bar Harbor Bank & Trust and Cross Insurance. Refreshments will be served. or more information, please visit mdibl.org/events/ or call 207-288-3147.