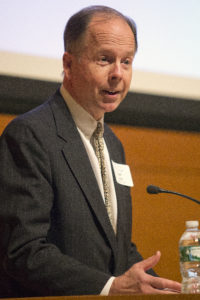 BAR HARBOR, MAINE — Art writer Carl Little and his brother, artist David Little, will talk about the making of their new book, “Art of Acadia,” at an Art Meets Science Café to be held at the MDI Biological Laboratory’s Kinne Library at 5 p.m. on Monday, Aug. 15, 2016.

Published in conjunction with the 100th anniversary of the founding of Acadia National Park, the Littles’ book highlights the artists who have been inspired by the landscape of greater Mount Desert Island, including the Cranberry Isles and Schoodic Point, from the early 19th century to today. The Littles will offer a sampling of images from the book.

The Art Meets Science Cafés are offered by the MDI Biological Laboratory in fulfillment of its mission to increase public engagement with science. The cafés follow the format of the popular MDI Science Cafés, also offered through the laboratory, in which short presentations are followed by lively, informal discussion.

The series of Art Meets Science Cafés is being held in conjunction with theMDI Biological Laboratory’s 2016 Art Meets Science exhibit. The exhibit, entitled “A Fresh Field of Life: Artists, Naturalists and the Vision for Acadia,” celebrates the unique history of art and science on Mount Desert Island.

Carl Little, a resident of Mount Desert Island, is an art historian, writer, researcher, curator, lecturer and poet who has been immersed in the art world for more than 30 years. He has has published two collections of poems and more than 20 art books, most of which have been inspired by his home state.

“Living in Maine has had an enormous impact on my writing,” he said in an interview.  “There is no end to wonderful artists of all aesthetic persuasions to write about.”

David Little, who lives and paints in Portland, Maine, holds a master’s degree in fine arts from the University of Iowa, and studied for two seasons at the Skowhegan School of Painting & Sculpture. He has exhibited widely in Maine and New York and his work has appeared in publications including “Art of the Maine Coast” and “Paintings of New England.”

Known for his landscapes of Maine’s interior, especially the Katahdin region, he is the author with his brother of “Art of Katahdin,” published by Down East Books.

In “Art of Acadia,” the Littles discuss the works of the celebrated painters who have been inspired by Acadia – from 19th century landscape painter Thomas Cole to contemporary photorealist Richard Estes, who is a summer resident of Northeast Harbor. The book was published in June by Down East Books.

Included in the exhibit is an oil painting by artist Alexandra Tyng called “Jet Streams,” that is reproduced on the cover of “Art of Acadia.” The painting is a dramatic aerial portrait of the eastern peninsula of Mount Desert Island looking north over Northeast Harbor and Seal Harbor toward Jordan Pond and beyond.

Art Meets Science Cafés will alternate with MDI Science Cafés at the MDI Biological Laboratory every Monday evening from June 20 to Sept. 19, with the exception of Labor Day. The cafés will take place at 5 p.m. at the laboratory’s Kinne Library. The exhibit will be on view prior to all cafés starting at 4:15 p.m.

Art Meets Science Cafés are free and open to the public. Light refreshments will be available. For more information on cafés or the exhibit, please visit mdibl.org/events/.