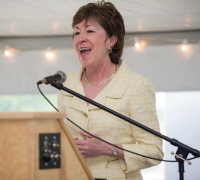 BAR HARBOR, MAINE – Senator Susan Collins joined leaders from colleges and research institutions across Maine as well as dozens of Maine college students at the MDI Biological Laboratory today to celebrate the receipt of an $18.4 million grant from the National Institutes of Health. The award will further strengthen biomedical research and workforce training in Maine.

“This is precisely the kind of investment that our state needs,” Collins said in her remarks to the crowd gathered in a tent set up on the campus of the MDI Biological Laboratory. “I was happy to work with Senator King in securing the $18.4 million grant to continue the important INBRE program, which will not only enhance Maine’s research capacity, but will also train Maine undergraduate students for high-tech, 21st century jobs.”

The $18.4 million grant will continue the Maine INBRE, or “IDeA Network of Biomedical Research Excellence,” program for another five years. Founded in 2001 and led by the MDI Biological Laboratory, the program has created a network of 13 public and private colleges, universities, and research institutions in Maine.

“The INBRE program is a powerful instrument for bringing educational institutions from Fort Kent to South Portland together to build on their collective strengths and help our state be more competitive nationally,” Collins noted. “Since it began in 2001, INBRE has brought more than $100 million in federal funds into Maine. It has strengthened our state’s research infrastructure and trained more than 2,000 Maine students in biomedical research techniques.”

Follow-up studies conducted by the MDI Biological Laboratory show that of the students who have participated in Maine INBRE programs and have graduated from college, 90 percent are pursuing careers or graduate education in health-related fields. INBRE grants have led to the creation of more than one hundred new, high-paying jobs in Maine.

Collins commended the leadership of the MDI Biological Laboratory for bringing funding for biomedical research to Maine and opening new opportunities for Maine students. “For years,” she said, “I have advocated for more collaboration between Maine’s research and development labs and Maine’s students, and MDI Biological Lab has led the way.”

The president of the MDI Biological Laboratory, Kevin Strange, Ph.D., thanked Collins and the rest of Maine’s congressional delegation for supporting Maine students and scientists. “Scientists nationwide are facing the most difficult funding climate in the history of modern-day science. Without the leadership of Senators Collins and King, and Representatives Michaud and Pingree—who believe wholeheartedly in the importance of continuing to fund our nation’s research enterprise—I’m convinced the situation would be much worse for Maine.”

Strange noted that the INBRE program had played a significant role not only in boosting the research sector of Maine’s economy, but had also led to his institution’s success in securing a $13 million grant establishing a “Center of Biomedical Research Excellence” at the Laboratory.

“Maine must transform its economy into one that is driven by technology-based industries,” Strange said. He noted that Governor LePage and the state legislature had taken “an important step forward investing in Maine’s future” by approving a $50 million bond package to support growth in the science and technology sectors. Three million dollars of that will enable the MDI Biological Laboratory to construct a 3,000 square foot research training laboratory to expand its workforce training programs.

The presidents of three INBRE academic institutions also spoke briefly at the event. Ronald Cantor, president of Southern Maine Community College in South Portland, Darron Collins, president of College of the Atlantic in Bar Harbor, and Kathryn Foster, president of the University of Maine at Farmington discussed the impact of the INBRE program in awakening their students’ interest in biomedical research and making it possible for students and faculty to engage in cutting-edge research at their own institutions and the MDI Biological Laboratory. On average, academic institutions participating in the INBRE program have seen a 59 percent increase in science or health majors since 2004.

Patricia Hand, vice president of the MDI Biological Laboratory, has led the INBRE program since its inception in 2001. “Although MDI Biological Laboratory is leading this effort we could not do this without our outstanding partners,” she said. “Together we are united in our goals: To create of a technically skilled workforce through hands on biomedical research training of undergraduate students, to give support to faculty to allow them to become more competitive for independent federal funding for research, to improve biomedical research resources at our institutions, and through the above to strengthen Maine’s economy.”

Hand noted that over the next five years, the INBRE grant will provide more than 1100 individual research-training experiences to undergraduate, graduate and medical students. “At least 14 science faculty across our state will receive research support that will enable them to compete for federal grants and train students in their laboratories,” she added, “and our institutions will continue to improve research resources on our campuses. For example, Southern Maine Community College (SMCC) and the University of Maine at Farmington will receive critically needed funding to renovate their laboratory facilities.”

Undergraduates from each of these colleges receive hands-on biomedical research training through short courses and summer fellowships at the MDI Biological Laboratory and internships in faculty laboratories at their home institutions. After taking a short course at the Biological Lab, SMCC student Peter Hanlon wrote, “The next time I step in a lab I will be much more prepared and comfortable than I would have been otherwise. It has truly strengthened my resolve to pursue a higher education in science.”