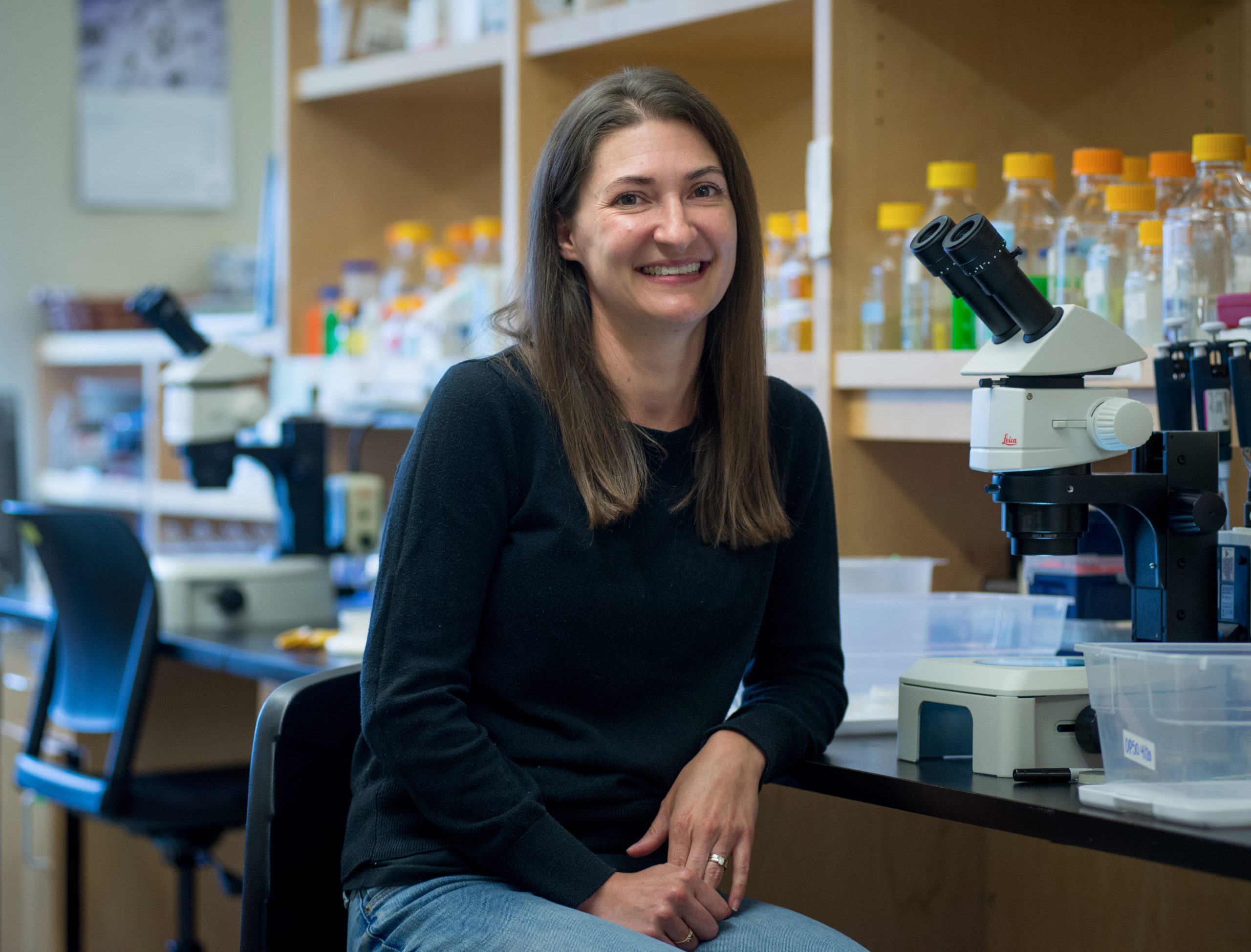 Human homolog in C. elegans opens new research window for diseases such as ALS and Alzheimer’s

Nucleolin is linked to human neurodegenerative disease and cancer. But the new research challenges recent theories of the role that structures inside the nucleus play in such disorders – and surfaces a powerful new tool for researching the function of Nucleolin and how it does contribute to disease.

“Nucleolin is a multifunctional protein conserved across many animals, plants, and fungi, but previously thought to be absent in nematodes,” says Spaulding, a post-doctoral fellow in the Updike lab at Mount Desert Island Biological Laboratory. “It’s also associated with familial ALS and Alzheimer’s disease, and overall nucleolar dysfunction is linked to neurodegeneration.”

Their identification of the Nucleolin homolog (named NUCL-1) establishes C. elegans as a new discovery platform for neuronal functions of Nucleolin and the genetics of related neurodegeneration.

Nucleolin is found mainly in the nucleolus, the factory inside a cell’s nucleus where ribosomes are assembled. Unlike many other membrane-bound organelles inside cells, the nucleolus behaves like a large liquid droplet, also called a condensate.

Condensates form through liquid-to-liquid phase separation. Some imagine blobs of different densities forming inside a lava lamp, but exactly how this is achieved in living cells is unclear. Spaulding and Updike’s work shows that NUCL-1 is needed for phase separation in the C. elegans nucleolus.

Surprisingly, disrupting phase separation in the germline had no effect on health or fertility

Super-focus image of a nucleolus in a live, wild-type C. elegans nematode, left, shows well-organized architecture of interior condensates. At right, when a newly discovered coding gene called NUCL-1 is disrupted in a mutant worm, the architecture falls apart. Contrary to some thinking about the function of nucleolus substructures, both wild-type and mutant worms were healthy, developed normally, and retained fertility. (Photo: Emily Spaulding, Ph.D.)

Because the roundworm is uniquely suited to in-vivo microscopy that allows close observations of proteins inside living animals, the findings could change the way scientists think about the characterization of condensates such as the nucleolus.

“C. elegans’ transparency allows us to do super-resolution imaging, which allows us to see nucleolar substructure in a living animal,” Spaulding says. “I’ve never seen images like this elsewhere.”

Spaulding likens the nucleolus to a Tootsie Pop.  “It’s got layers from the inside out,” she says. “Some proteins are localized to the innermost layer, and some proteins localize to the outermost layer. And each of these layers is thought to represent a step in ribosome biogenesis.”

The biological significance of condensate substructure is still under question; recent arguments hold that the precise, tiered spatial organization of the nucleolus is essential to ribosome production. But the MDIBL scientists observed that while removing a key protein domain of NUCL-1 in transgenic C. elegans disrupted nucleolar architecture within reproductive cells, the mutant worms still developed normally and produced normal offspring.

“We noticed that the nucleolus lost its beautiful substructure when we took away the domain, but the worms were totally fine” she says. “That was a surprise and it’s hinting that maybe this precise organization into layers isn’t as important as we thought to nucleolar function. And this could be important for understanding ALS or Alzheimer’s Disease, where widespread disrupted phase separation is thought to contribute to disease.”

“It will be something that really impacts the field of phase separation, because a lot of the conclusions being drawn may be incorrect,” says Updike. “The results should be of widespread interest and will spark new avenues of study in the fields of phase separation, nucleolar structure and function, and Nucleolin-associated human disease.”

Spaulding is a 2022 recipient of the National Institutes of Health’s Outstanding Scholars in Neuroscience Award.

Link to the Nature Communications article, “RG/RGG repeats in the C. elegans homologs of Nucleolin and GAR1 contribute to sub-nucleolar phase separation”: