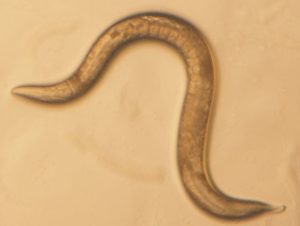 BAR HARBOR, MAINE – Scientists at the MDI Biological Laboratory are identifying the basic mechanisms behind Parkinson’s disease, a degenerative neurological disease affecting millions of people worldwide. The research could some day lead to treatments for a disabling condition for which medicine now has nothing to offer other than symptomatic relief.

The designation of April as Parkinson’s Awareness Month has called attention to the need for treatments for this disease, a progressive disorder of the nervous system that causes tremors, stiffness, slowed movement and impaired balance and coordination. The disease affects nearly 1 million people in the United States alone and is age-related: the average age of onset is 60 and the incidence rises sharply with age.

Although many scientists study Parkinson’s in the context of its hereditary basis, most cases are sporadic, meaning they are not associated with a disease-causing mutation in a single gene. MDI Biological Laboratory assistant professor Aric Rogers, Ph.D., and his team are investigating ways of enhancing basic mechanisms to keep cells healthy and resistant to the conditions that can lead to Parkinson’s.

“Rather than trying to fix genes that may or may not contribute to Parkinson’s disease on a case-by-case basis, we’re studying genes with the potential to strengthen cellular systems, including one gene that we consider to be a master regulator of protein synthesis in the cell,” he explained.

The MDI Biological Laboratory, in Bar Harbor, Maine, is an independent, nonprofit biomedical research institution focused on increasing healthy lifespan and harnessing the natural ability to repair and regenerate tissues damaged by injury or disease. The institution develops solutions to complex human and environmental health problems through research, education and ventures that transform discoveries into cures.

“The Parkinson’s Awareness Month designation calls attention to the fact that there is no cure for this disease, which is becoming increasingly prevalent as the world’s population ages,” said Kevin Strange, Ph.D., the MDI Biological Laboratory’s president. “Aric Rogers’ important work reflects our mission of developing treatments that address the underlying causes — rather than the symptoms — of age-related disorders.”

All animals need to manufacture new and different proteins to perform various functions. When Rogers’ team “turned down” the activity of the protein synthesis regulator gene in the tiny roundworm, C. elegans, they were able to reduce the toxicity of malformed proteins associated with Parkinson’s disease. They were also able to redirect remaining protein synthesis capability toward maintaining cellular health.

“By lowering the activity of a specific gene, we were able to ‘tighten the belt’ on protein synthesis and shift remaining production toward proteins whose job it is to keep cells healthy,” said Rogers. “The effect was dramatic — by targeting a single gene, we saw an 80 percent decrease in Parkinson’s-associated toxicity. This suggests that Parkinson’s is linked to an inability to properly regulate proteins in the cell.”

The understanding of molecular pathways gained through Rogers’ research raises the prospect that drugs can be developed for use in humans to turn down the production of proteins that can become toxic, such as alpha-synuclein, which has been linked with Parkinson’s disease, or beta-amyloid, which is associated with Alzheimer’s disease – or even the unrestrained cell growth associated with cancer, Rogers said.

Rogers was inspired to explore the role of protein synthesis in Parkinson’s by his work on the effect of dietary restriction on aging. Dietary restriction lowers protein synthesis and has been known since the 1930s to extend lifespan in rodents. Since then, it has been shown to increase lifespan and ameliorate the effects of age-related chronic diseases in diverse species from yeast to primates.

Rogers is now applying the techniques employed in his research on dietary restriction to neurodegenerative disorders. Because the protein synthesis regulator gene that Rogers’ team is studying becomes less active when food is scarce, he believes that by turning down the activity of this gene, his team may be tapping into an adaptive survival response to improve human health and affect disease outcomes.

His laboratory uses the tiny roundworm, C. elegans, as a model because it shares many of its genes with humans and because its three-week lifecycle allows scientists to quickly test how genes affect disease and longevity.