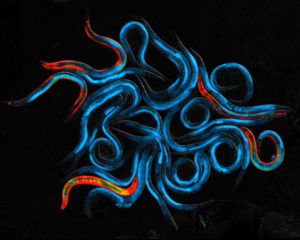 BAR HARBOR, MAINE — Scientists have known for decades that drastically restricting certain nutrients without causing malnutrition prolongs health and lifespan in a wide range of species, but the molecular mechanisms underlying this effect have remained a mystery.

In a paper recently published in the journal Aging Cell, MDI Biological Laboratory scientist Aric Rogers, Ph.D., sheds light on an important genetic pathway underlying this process, raising the possibility that therapies can be developed that can prolong the healthy years without suffering the consequences of a severely restricted diet.

“It’s tantalizing to think that we might be able to activate a protective response to enhance our own health without resorting to extreme dietary regimes,” Rogers said.

Rogers studies mechanisms important to the positive effects of dietary restriction in an intact organism — the tiny roundworm, C. elegans — as opposed to cells in a petri dish. C. elegans is an important model in aging research because it shares nearly half of its genes with humans and because of its short lifespan — it lives for only two to three weeks — which allows scientists to study many generations over a short period of time.

“Aric’s identification of a molecular mechanism governing the life-prolonging effects of dietary restriction is a validation of our unique approach to research in aging and regenerative biology,” said Kevin Strange, Ph.D., president of the MDI Biological Laboratory. “Our use of whole organisms as research models provides greater insight into the many factors controlling physiological processes than the use of cells alone.”

The life-prolonging effects of dietary restriction, also known as DR or CR (calorie restriction), occur in just about every animal tested. They are thought to be an evolutionary adaptation to harsh environmental conditions. In the absence of enough food to eat, evolution has programmed organisms to switch from a growth mode to a survival mode so they can live long enough to reproduce when conditions improve.

The new study builds on Rogers’ earlier research linking the effects of DR to the inhibition of genes governing the formation of proteins. In times of hardship, the body cuts back on the bulk of proteins synthesized, which are linked with growth and reproduction, in order to redirect the cell’s energy toward stress-responsive proteins that help extend lifespan by maintaining cell balance and health.

Specifically, the study found that the enhanced robustness associated with reducing the production of protein isn’t from reduced protein synthesis per se, rather to the triggering of a stress response governing protein homeostasis — or proteostasis — a fancy word for the cell’s quality control machinery. The stress response ensures that this quality control machinery keeps working optimally, despite harsh environmental conditions.

The identification of a mechanism underlying the protective effect of DR could lead to therapies for age-related diseases, including Alzheimer’s and Parkinson’s, that are associated with diminished cellular quality control. Alzheimer’s, for instance, is associated with the build-up of a toxic protein, beta amyloid, in the brain, and Parkinson’s with a build-up of a toxic protein called alpha synuclein.

The link between aging and weakened cellular “housekeeping” functions raises the possibility that new drugs to prolong lifespan could also delay the onset of age-related degenerative diseases. Now that Rogers has identified a link, the next step is to investigate cause and effect by manipulating the genetic pathways that inhibit protein formation to see if the body’s ability to clear molecular clutter is improved.

“We think therapies to activate these protective pathways could not only prolong lifespan, but also delay the onset of age-related diseases,” Rogers said. “Most older people suffer from multiple chronic diseases. Anti-aging procedures applied to disease models almost always delay disease onset and improve outcomes, which suggests that disease-suppressing benefits may be accessed to extend healthy human lifespan.”