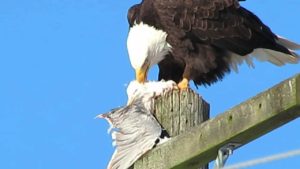 BAR HARBOR, MAINE – Seagulls are an iconic symbol of coastal Maine, whether they are gliding over the wave crests, picking garbage out of the trash or lying in wait for cast-off crumbs from a picnic hamper. But we shouldn’t take these seabirds for granted: their numbers are declining dramatically, due in part to the restoration of the bald eagle population, which is increasingly preying on the chicks of gulls, cormorants and other seabirds.

John G.T. Anderson, Ph.D., a professor of ecology and natural history at the College of the Atlantic in Bar Harbor, has been studying seabirds, including gulls, guillemots and Leach’s storm petrels, during the summer months at Great Duck, a small island about six miles south of Mount Desert Island. The population of herring gulls in Maine has declined by about 40 percent in the last 10 years, due largely to the restoration of the bald eagle population, he says.

Anderson will be the speaker at a MDI Science Café to be held at McKay’s Public House, 231 Main St., Bar Harbor, at 5:30 p.m. on Wednesday, March 2. The café is offered by the MDI Biological Laboratory in fulfillment of its mission to increase public engagement with science. The cafés offer a chance to hear directly from scientists about their latest research. Short presentations delivered in everyday language are followed by lively, informal discussion.

“As we observe Acadia National Park’s centennial, it’s important to note that George Dorr, a founder of the park, was also responsible for the establishment of the MDI Biological Laboratory with the aim of creating a home for scientists to study the natural world,” said Kevin Strange, Ph.D., the laboratory’s president. “The science cafés fulfill this mission by engaging the public in the exploration of science-based solutions for addressing biological problems.”

The 2016 schedule includes several presentations on biological research relevant to the national park, including Anderson’s presentation on seabirds, entitled “Of What Value Is a Seagull? Gulls, Eagles, and the Changing Ecology of Coastal Maine,” which will address what we can learn from more than a century of the study of ornithology in Maine and how we can use that knowledge in planning for the next century.

“We appear to be in the midst of a massive and alarming decline of once-common species, including herring and great black-backed gulls,” says Anderson. “Evidence to date suggests that in Maine the successful restoration of bald eagles may have had unforeseen and even alarming consequences for other birds.”

In 1967, with only a few hundred nesting pairs of bald eagles remaining nationally, the bald eagle was officially declared “endangered” in most states, including Maine. As a result of population growth fostered by the designation, it was shifted to the “threatened” list in 1995 in those states where it had previously been considered endangered, and by 2007, when the national population of nesting birds had reached nearly 10,000, it was removed from both lists.

In Maine, the state’s bald eagles are experiencing a population growth of about 7 percent each year, according to the U.S. Fish and Wildlife Service. There are now well over 600 nesting pairs in the state, up from a low of about 30 pairs in the late 1970s. During this same period, fish stocks in the Gulf of Maine have declined for a variety of reasons. With fewer fish to eat, the growing population of eagles has turned to raiding the nesting colonies of seabirds.

The factors that have contributed to the decline in the seabird population are varied and complex. In addition to predation from bald eagles, these include the closing of dumps and open landfills, which once were primary food sources, the decline of fish stocks and increased competition with eagles and other large birds for food. Anderson will address the multiple facets of this complex seabird ecosystem.

MDI Science Cafés, which are sponsored by Cross Insurance, Bar Harbor Bank & Trust and McKay’s Public House, are open to the public and free of charge. Refreshments will be served.

The topic of the next café, to be held on Wednesday, April 6, will be the use of satellite imagery to map and monitor historic disturbance patterns in Maine forests and what those images reveal about how the state’s forests are changing and the forces that have led to that change.

MDI Science Cafés are part of the international Science Café and Cafés Scientifique movement to promote public engagement with science.