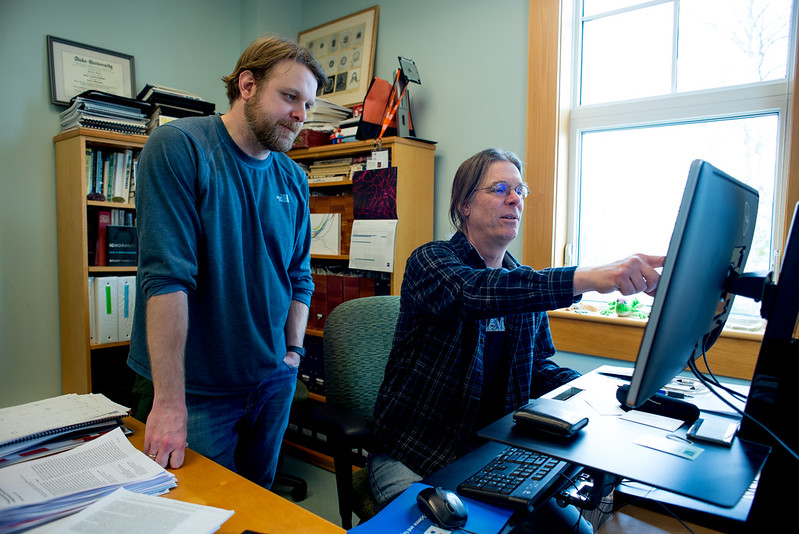 Recent research from the lab of James A. Coffman, Ph.D., who studies ​​how chronic stress experienced during early development can genetically influence adult disease, maps how the klf9 gene impacts the body’s management of stress throughout the day.

For decades, researchers have studied how early life exposure to chronic stress can shorten lifespan and contribute to diseases like diabetes, arthritis, cancer, cardiovascular disease, and even mental illness later in life. Previous studies by Coffman show that the gene helps regulate how cells respond to the stress hormone cortisol, which activates a protein called the glucocorticoid receptor. “The glucocorticoid receptor is the gas, or on switch, and klf9 is the brakes or off switch,” says Coffman. “You need both to have robust regulation of cortisol response.”

But cortisol is not just released in response to stress, it also has a natural rhythm within the body throughout the day, which plays important roles in regulating metabolism and various bodily functions, including immunity. Recently, a paper published by Ian Gans, Ph.D., a former graduate student in Coffman’s lab, further defines the role klf9 plays in regulating the cellular response to cortisol throughout the day.

Researchers have long known that the gene fkbp5, which is activated by the glucocorticoid receptor, affects the health of individuals that have been exposed to stress or trauma. “Fkbp5 goes up in response to cortisol, but also increases the resistance of the cell to cortisol. Glucocorticoid resistance is a common health problem that means your cells are not able to respond to the signal and adjust in the way that is optimal,” says Coffman. “In this study, we found that Klf9 regulates expression of fkbp5.”

This paper not only further cements klf9 as a key player in regulating the cellular response to cortisol, it also sets a new and important standard for accurately measuring the dynamics of genes that respond to cortisol.

Cortisol, klf9, and fkbp5 are present in both humans and zebrafish. Gans created a strain of zebrafish without the klf9 gene and compared them to zebrafish with the gene to see how klf9 might contribute to the response to cortisol. At first, he sampled at only a few time points to measure gene expression, a fairly common approach in the field, but the results were erratic depending on when he took samples — sometimes klf9 and fkbp5 upregulated and other times they were under expressed in the cortisol-treated fish. Gans reasoned that since the zebrafish’s cortisol was going up and down on an hourly basis in accordance with the hormone’s natural rhythm, he should sample the fish every 15 minutes over the course of eight-hour periods to gain data to see any trends over a longer time span.

“One of the things this paper shows is an analysis you don’t see done very often when comparing gene expression in a knockout model versus a wildtype group, where you see both the change caused by the mutation and the change through time,” Coffman says. “Doing those high-density time courses allowed us to see something we could not have seen in another way.”

In the future, Gans believes it’s important for scientists to look at more specific types of cells and tissues. “We know that these genes are not expressed at the same level in every cell in the body,” Gans says.  The scientists think future research should also focus on zebrafish at different stages of life, since this study focused on the larval stage and much development takes place in zebrafish as they age.

Gans explains Coffman’s Lab was a supportive space during his Ph.D. studies. “Dr. Coffman has given me a lot of room to explore things,” he says. “I think there are grad students that have a very specific project planned out for them from day one, but in this case, I had more freedom in the lab.”

As a mentor, Coffman believes this freedom is beneficial for both students and the research. “The last part of the paper on metabolic genes was all Ian’s initiative to bring that in, and I am glad we did,” says Coffman. “When Ian started in the lab five years ago, we did not know anything about klf9, and he took it upon himself to find out more about it.”

Gans successfully defended his thesis on October 20, 2021 and has begun a postdoctoral position at the Maine Medical Center Research Institute, in Scarborough, Maine.

The MDI Biological Laboratory seeks to improve human health by discovering novel mechanisms of tissue repair, aging and regeneration. The goal of this research is to help scientists understand the complex cellular responses and interactions involved in regulating cortisol levels and, based on this understanding, develop new treatment strategies for mitigating the long-term effects of exposure to chronic stress.