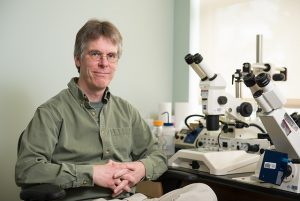 BAR HARBOR, MAINE — Scientists have long known that chronic stress experienced early in life, or even chronic prenatal exposure to maternal stress hormones in the womb, can shorten lifespan and contribute to age-related chronic diseases like arthritis, asthma, cancer, cardiovascular disease, diabetes and even mental illness later in life — long after the source of stress has been removed.

But the mechanisms behind these effects are not well understood.

Now, a team of scientists at the MDI Biological Laboratory in Bar Harbor, Maine, is shedding new light on the gene regulatory pathways activated by cortisol, a hormone secreted by the adrenal glands in response to stress. The team, which uses the common aquarium fish, the zebrafish, as a model, is led by associate professor James A. Coffman, Ph.D.

“In healthy individuals the immune system behaves like a well-regulated militia that responds rapidly to the body’s commands to mobilize or stand down, mounting an inflammatory response that persists only as long as needed to clear an infection or stimulate wound healing,” Coffman explained. “We believe klf9 is a key gene for understanding the optimal regulation of inflammation and how it is compromised by early-life stress.”

In humans, chronic stress can be caused by psychosocial factors such as trauma, economic adversity or the struggle to cope with abusive circumstances, Coffman said. He noted that such stress, which is already endemic in many communities, is currently being exacerbated by the COVID-19 pandemic.

The identification of klf9 as a key regulator of the physiological response to cortisol builds on earlier research in which Coffman showed that chronic exposure to cortisol early in life has persistent effects on the stress response system that compromise the regulation of key immune system genes controlling inflammation.

The paper based on the new research, entitled “Klf9 Is a Key Feedforward Regulator of the Transcriptomic Response to Glucocorticoid Receptor Activity,” was recently published in Scientific Reports, an online journal from the publishers of Nature.

The research was conducted in zebrafish because they are relatively easy and economical to work with and because they share their stress response system with humans, along with the associated regulatory genes and gene circuitry. In his earlier studies, Coffman found that zebrafish larvae treated with cortisol for the first five days of life had increased proinflammatory gene activity and gave rise to adults with a dysregulated immune response.

Coffman is especially intrigued by the role that klf9 may play in “inflammaging,” a chronic, low-grade inflammation that is believed to accelerate aging and exacerbate many age-related diseases. In the future, he would like to explore the role of klf9 in age-related neurodegenerative diseases such as Alzheimer’s.

Another potential area for investigation is klf9’s role in regeneration. Because regenerative ability has been found to depend on the immune system, a better understanding of the immune system’s response to stress could help explain the connection between chronic stress and impaired healing ability.

“The new study on klf9 highlights the potential synergies that can occur between scientists working in aging and regeneration, the lab’s two areas of research,” said Hermann Haller, M.D., president. “It also demonstrates the importance of basic research: science will only be able to able to develop new therapies for treating aging and age-related disease by understanding the underlying mechanisms.”

“Klf9 has become a research focus of my lab because it’s interesting in a lot of different respects — not just in terms of the stress response,” Coffman said. “It’s an important gene with its fingers in a lot of different regulatory pathways and it is understudied. In the future, we will seek to identify how klf9 optimizes immune cell responsiveness to cortisol and how those functions are compromised in aging.”

The study was enabled by the CRISPR gene editing technology, which allows scientists to create genetically modified mutants with the attributes they are seeking to study. In this case, zebrafish were developed in which the genes encoding the GR and Klf9 were deactivated, which allowed scientists to compare the stress response in normal fish with those of their genetically altered counterparts.

In addition to Coffman, who is the corresponding author, the authors include Ian Gans, the doctoral candidate and graduate research assistant who developed the klf9 mutant; Ellen I. Hartig; Shusen Zhu; Andrea R. Tilden, Ph.D.; Lucie N. Hutchins; Nathaniel J. Maki; and Joel H. Graber, Ph.D. Except for Tilden, a visiting scientist at the MDI Biological Laboratory from Colby College in Waterville, Maine, all are currently or were formerly associated with the MDI Biological Laboratory.

The research was supported by grants from the National Institutes of Health (R03- HD099468, P20-GM104318, and P20-GM103423), by a Morris Scientific Discovery Award to Coffman and by a gift from The Linde Packman Lab for Biosciences Innovation to Colby College.