HomeNewsPress ReleasesMDI Science Café speaker to share story of how scrapbooks bound for the trash heap reveal an irreplaceable collection of historic DNA. 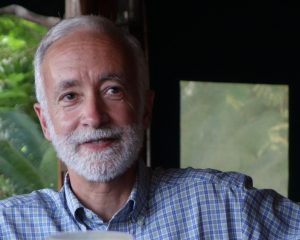 BAR HARBOR, MAINE – The topic of the MDI Science Café Online for Monday, July 13, 2020 will be “Science and Sentiment: The Attractions of Hair in 19th Century America,” presented in a live online lecture by Robert McCracken Peck, Curator of Art and Senior Fellow of the Academy of Natural Sciences of Philadelphia, Drexel University.

When Peck first started at Drexel University, little did he know he would become a key player in a storyline that might seem like it could be beginning of the next installment in the popular “Indiana Jones” movie series. Discovering a collection that had been earmarked for the trash because it was deemed “unfit for study”, Peck’s curiousity got the better of him. In the early 19th century compilation he found locks of hair from artists, scientists, and politicians from all over the world, including  one album that contained samples from signers of the Declaration of Independence and the first thirteen of presidents of the United States.

Using photographs taken for his recently published book, Specimens of Hair, The Curious Collection of Peter A. Browne, Peck will share the story behind these remarkable and fascinating albums. Now recognized as irreplaceable repositories for DNA, the collection is a reminder that the past can still hold huge scientific value, even as researchers strive to move ahead.

Robert McCracken Peck is a writer, naturalist, and historian who has traveled extensively in North and South America, Africa, Asia and Europe, and is the auther of numerous books and articles on natural history and the history of science. He is frequently called upon to provide commentary for various news and media outlets.

The free, online event will be held at 5 p.m. and participant registration is necessary to gain the access link for the presentation. You can register for the event at mdibl.org/events.