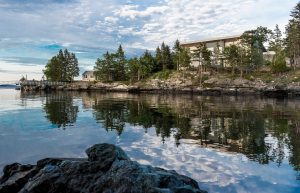 BAR HARBOR, MAINE — The interface between regeneration and aging will be the subject of a “Resetting the Aging Clock” lecture series for the public by leading scientists in the field of regenerative biology and aging to be held July 22 through Aug. 1 at the MDI Biological Laboratory in Bar Harbor, Maine.

While aging was once viewed as a “wearing out” process — occurring in the same way that a car or appliance wears out — scientists are increasingly viewing aging as a failure to regenerate, an idea that will be familiar to those who remember how quickly they healed when they were young.

The lecture series will be held in conjunction with a two-week biomedical innovation research training course, “Immersion in Comparative Aging and Regenerative Biology (iCARB),” whose goal is to understand the determinants of regenerative capacity in diverse animal species and their link to biological aging.

“The young heal wounds, mend bones and regrow tissues with ease, but these abilities are lost over time, leading to frailty, decay and age-related degenerative diseases,” said Voot Yin, Ph.D., iCARB course director. “By gaining an understanding of why we lose regenerative ability, we will be able to develop therapies to reset the aging clock.”

The guest faculty will include some of the most provocative thinkers in the fields of regenerative biology and aging. As part of the institution’s mission to promote scientific literacy and increase public engagement with science, the iCARB program will include lectures for the public by guest faculty and speakers.

The lectures, which will be followed by receptions, will be held in Maren Auditorium on the institution’s Bar Harbor campus at 159 Old Bar Harbor Road at 4 p.m. as follows:

Vera Gorbunova, Ph.D., studies the naked mole rat, which is known for its exceptional longevity. Unlike the mouse, which lives for about two years, the naked mole rat lives for decades and shows no signs of aging — a phenomenon called negligible senescence. Studies of negligibly senescent animals can lead to a better understanding of human aging. The naked mole rat is the only mammal that has been found to demonstrate negligible senescence. Because aging is associated with mutations and genomic instability, Gorbunova also studies how the repair of DNA breaks changes with age in human cells and mice. Finally, she studies anti-cancer mechanisms in short- and long-lived rodents in order to better understand the increased incidence of cancer that occurs with age. Gorbunova is the Doris Johns Cherry Professor of Biology and co-director of the Rochester Aging Research Center at the University of Rochester, Rochester, N.Y.

The 24th Cserr Lecture is given in memory of Helen F. Cserr, Ph.D., a scientist and researcher who conducted research at the MDI Biological Laboratory for 20 summers, including on the study of the blood-brain barrier in marine organisms. She is remembered as a valued member of the MDI Biological Laboratory community because her graciousness, her brilliant mind, the high quality of her research and her ability to attract top-notch students.

Alejandro Sánchez Alvarado, Ph.D., is known for his research on the planarian, a flatworm that can regenerate an entire organism from a tiny piece of tissue. A Howard Hughes Medical Institute and Stowers Institute for Medical Research investigator in Kansas City, Mo., and a member of the National Academy of Sciences, Sánchez Alvarado seeks to understand the molecular mechanisms underlying regeneration. He is a frequent guest faculty member at the MDI Biological Laboratory and a member of its Board of Scientific Counselors. “We all have a bit of planaria in our genomes,” he has observed. “You and I are turning over a number of cells equivalent to our body weight every year. I lost billions of cells yesterday, but this morning I still recognized myself in the mirror. That’s because basic mechanisms are in place to retain our original form and function.”

The 36th Kinter Lecture is given in memory of William B. Kinter, Ph.D., an MDI Biological Laboratory investigator from 1963 until his death in 1978. His interest in the effect of toxic compounds on the environment led to landmark papers on the effect of pesticides on eggshell thinning in birds and important studies on the physiological effects of environmental pollutants, including crude oil.

Malcolm Maden, Ph.D., a biology professor at the University of Florida and a faculty member at the University of Florida Genetics Institute, studies the relationship between development and regeneration in various organ systems including limb, lung, skin and nervous system. He is studying the role of signaling molecules in the processes of development and regeneration with the goal of determining if regeneration is a process of redevelopment that can be induced by reawakening developmental pathways. He studies the axolotl, a Mexican salamander that is a champion of regeneration, and the African spiny mouse, a mammal that, unlike other mammals, can regenerate skin, skeletal muscle, cartilage and heart tissue. His research on the mechanisms governing regeneration could contribute to therapies to improve healing in humans.

Nadia Rosenthal, Ph.D., F.Med.Sci., is the scientific director of The Jackson Laboratory and holds a chair in cardiovascular science at Imperial College London. Her research focuses on muscle and cardiac developmental genetics and the role of growth factors, stem cells and the immune system in regeneration. She has received many honorary doctorates and prizes, participates on international advisory boards and committees and is a founding editor of Disease Models and Mechanisms and editor-in-chief of Differentiation and of npj Regenerative Medicine. She holds a doctorate from Harvard Medical School, where she directed a biomedical research laboratory. She also established and headed the European Molecular Biology Laboratory (EMBL) campus in Rome and is founding director of the Australian Regenerative Medicine Institute at Monash University and founder of EMBL Australia.