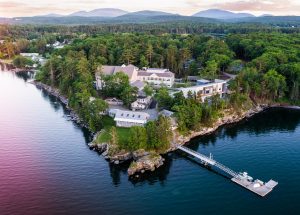 BAR HARBOR, MAINE — How close is medicine to an anti-aging pill? Can anti-aging therapies delay the onset of age-related degenerative diseases? What lifestyle choices can individuals make to prolong healthy lifespan?

These are some of the tantalizing questions that will be addressed in a lecture series for the public by leading scientists in the field of aging research entitled “Live Longer, Live Better.” The lecture series will be held Aug. 6 through 10 at the MDI Biological Laboratory in Bar Harbor, Maine.

“The public’s understanding of aging biology lags behind the extraordinary developments in the field,” said Kevin Strange, Ph.D., MDI Biological Laboratory president. “In this lecture series, top scientists from around the country will discuss advances that are expected to lead to new therapies to extend healthy  lifespan.”

The average American lifespan has increased by about 30 years since 1900 – from about 50 to about 80. But health hasn’t kept pace: about two-thirds of older Americans suffer from multiple age-related degenerative diseases, including Alzheimer’s, cancer, diabetes, heart disease and Parkinson’s.

“Medicine has traditionally tackled degenerative diseases on a disease-by-disease basis,” said course director Aric Rogers, Ph.D. “But since the common risk factor is old age, an increased understanding of the biology of aging means that a single medicine may be able to address many of these diseases at once.”

The lectures will be held in Maren Auditorium on the institution’s Bar Harbor campus at 4 p.m. as follows:

David Sinclair, Ph.D., a professor at Harvard Medical School and co-director of the Paul F. Glenn Center for the Biology of Aging, is known for his work on why we age and slowing aging’s effects. The goal of his work is to establish new biological approaches that can be translated into radically different medicines to promote longer, more productive lives. He is especially interested in how genetic and epigenetic changes drive aging, common diseases and disorders such as cancer, heart disease, inflammation, neurodegeneration, infertility and diabetes. Another interest is sirtuins, a family of proteins that is a key regulator of longevity. Sinclair is the co-founder of several biotech companies. He is also co-founder and co-chief editor of the journal Aging. His work has been featured in books and documentaries and on television shows, including “60 Minutes.” He is an inventor on more than 40 patents, has received more than 25 awards and was listed by TIME as one of the “100 most influential people in the world.”

The 36th Kinter Lecture is given in memory of William B. Kinter, Ph.D., an MDI Biological Laboratory investigator from 1963 until his death in 1978. His interest in the effect of toxic compounds on the environment led to landmark papers on the effect of pesticides on eggshell thinning in birds and important studies on the physiological effects of environmental pollutants, including crude oil.

The 24th Cserr Lecture is given in memory of Helen F. Cserr, Ph.D., a scientist and researcher who conducted research at the MDI Biological Laboratory for 20 summers, including on the study of the blood-brain barrier in marine organisms. She is remembered as a valued member of the MDI Biological Laboratory community because of her brilliant mind, her graciousness, the high quality of her research and her ability to attract top-notch students.