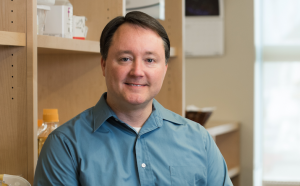 BAR HARBOR, MAINE — The MDI Biological Laboratory has announced that the U.S. Department of Health and Human Services has awarded a grant in the amount of $373,500 per year for five years to Aric Rogers, Ph.D., to support his research on the cellular and molecular mechanisms governing aging.

“This grant will allow Aric to continue with his important work of deciphering the pathways that govern aging,” said Hermann Haller, M.D., president of the MDI Biological Laboratory. “Science is closing in on the ability to extend healthy lifespan, and this grant will bring us even nearer to achieving that goal.”

The grant was awarded by the U.S. Department of Health and Human Services under number 1R01AG062575-01.