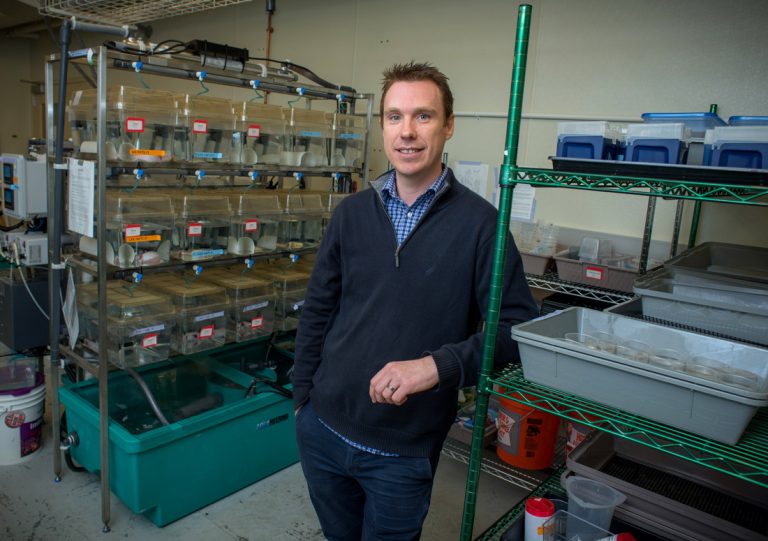 Many salamanders can readily regenerate a lost limb, but adult mammals, including humans, cannot. Why this is the case is a scientific mystery that has fascinated observers of the natural world for thousands of years.

Now, a team of scientists led by James Godwin, Ph.D., of the MDI Biological Laboratory in Bar Harbor, Maine, has come a step closer to unraveling that mystery with the discovery of differences in molecular signaling that promote regeneration in the axolotl, a highly regenerative salamander, while blocking it in the adult mouse, which is a mammal with limited regenerative ability.

“Scientists at the MDI Biological Laboratory have been relying on comparative biology to gain insights into human health since its founding in 1898,” said Hermann Haller, M.D., the institution’s president. “The discoveries enabled by James Godwin’s comparative studies in the axolotl and mouse are proof that the idea of learning from nature is as valid today as it was more than one hundred and twenty years ago.”

Instead of regenerating lost or injured body parts, mammals typically form a scar at the site of an injury. Because the scar creates a physical barrier to regeneration, research in regenerative medicine at the MDI Biological Laboratory has focused on understanding why the axolotl doesn’t form a scar – or, why it doesn’t respond to injury in the same way that the mouse and other mammals do.

“Our research shows that humans have untapped potential for regeneration,” Godwin said. “If we can solve the problem of scar formation, we may be able to unlock our latent regenerative potential. Axolotls don’t scar, which is what allows regeneration to take place. But once a scar has formed, it’s game over in terms of regeneration. If we could prevent scarring in humans, we could enhance quality of life for so many people.”

The axolotl as a model for regeneration

The axolotl, a Mexican salamander that is now all but extinct in the wild, is a favorite model in regenerative medicine research because of its one-of-a-kind status as nature’s champion of regeneration. While most salamanders have some regenerative capacity, the axolotl can regenerate almost any body part, including brain, heart, jaws, limbs, lungs, ovaries, spinal cord, skin, tail and more.

Since mammalian embryos and juveniles have the ability to regenerate – for instance, human infants can regenerate heart tissue and children can regenerate fingertips – it’s likely that adult mammals retain the genetic code for regeneration, raising the prospect that pharmaceutical therapies could be developed to encourage humans to regenerate tissues and organs lost to disease or injury instead of forming a scar.

In his recent research, Godwin compared immune cells called macrophages in the axolotl to those in the mouse with the goal of identifying the quality in axolotl macrophages that promotes regeneration. The research builds on earlier studies in which Godwin found that macrophages are critical to regeneration: when they are depleted, the axolotl forms a scar instead of regenerating, just like mammals.

The paper on the research, entitled “Distinct TLR Signaling in the Salamander Response to Tissue Damage” was recently published in the journal Developmental Dynamics. In addition to Godwin, authors include Nadia Rosenthal, Ph.D., of The Jackson Laboratory; Ryan Dubuque and Katya E. Chan of the Australian Regenerative Medicine Institute (ARMI); and Sergej Nowoshilow, Ph.D., of the Research Institute of Molecular Pathology in Vienna, Austria.

Godwin, who holds a joint appointment with The Jackson Laboratory, was formerly associated with ARMI and Rosenthal is ARMI’s founding director. The MDI Biological Laboratory and ARMI have a partnership agreement to promote research and education on regeneration and the development of new therapies to improve human health.

Specifically, the paper reported that the signaling response of a class of proteins called toll-like receptors (TLRs), which allow macrophages to recognize a threat such an infection or a tissue injury and induce a pro-inflammatory response, were “unexpectedly divergent” in response to injury in the axolotl and the mouse. The finding offers an intriguing window into the mechanisms governing regeneration in the axolotl.

Being able to ‘pull the levers of regeneration’

The discovery of an alternative signaling pathway that is compatible with regeneration could ultimately lead to regenerative medicine therapies for humans. Though regrowing a human limb may not be realistic in the short term, significant opportunities exist for therapies that improve clinical outcomes in diseases in which scarring plays a major role in the pathology, including heart, kidney, liver and lung disease.

“We are getting closer to understanding how axolotl macrophages are primed for regeneration, which will bring us closer to being able to pull the levers of regeneration in humans,” Godwin said. “For instance, I envision being able to use a topical hydrogel at the site of a wound that is laced with a modulator that changes the behavior of human macrophages to be more like those of the axolotl.”

Godwin, who is an immunologist, chose to examine the function of the immune system in regeneration because of its role in preparing the wound for repairs as the equivalent of a first responder at the site of an injury. His recent research opens the door to further mapping of critical nodes in TLR signaling pathways that regulate the unique immune environment enabling axolotl regeneration and scar-free repair.