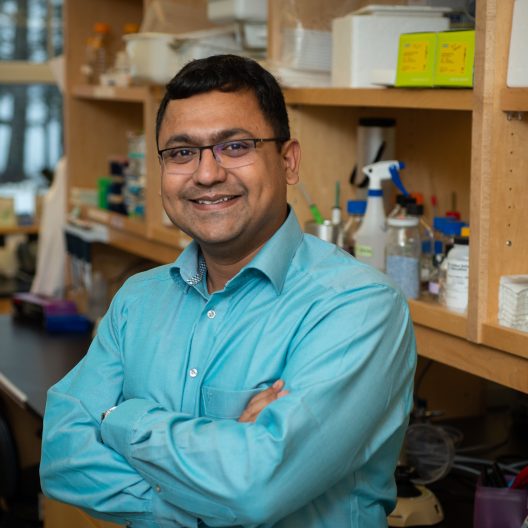 With its amazing capacity to regenerate tissues and organs, its ability to reproduce in a laboratory environment and the ease with which its genes can be manipulated, the Mexican salamander, or axolotl, holds enormous promise as a model for the study of regenerative medicine.

But unlike research on traditional models like the mouse, fruit fly (Drosophila melanogaster) and roundworm (Caenorhabditis elegans), which has progressed into the genetic age, the study of the axolotl (Ambystoma mexicanum) has been held back by a lack of scientific tools to work with it, including sophisticated genomic resources as well as experimental and genetic tools.

That is now changing due to research at the MDI Biological Laboratory in Bar Harbor, Maine, and elsewhere. The development of new tools to work with the axolotl is elevating it to the level of established research models and positioning the community of scientists who use it as a model for exponential growth. As a result of these changes, the laboratory is expected to become a global epicenter for axolotl research.

The institution’s growing prominence in the axolotl community is owing to Prayag Murawala, Ph.D., who joined the faculty last year. Murawala, who previously worked in the laboratory of Elly Tanaka, Ph.D., the world’s preeminent axolotl researcher, at the Research Institute of Molecular Pathology in Vienna, Austria, brought the latest tools for working with the axolotl, many of which he developed, to his new post, along with a commitment to fostering the growth of the axolotl as a research model.

Many of the tools that have been developed for working with the axolotl, as well as those that are critically needed to expand the scope of axolotl research, were recently described by Murawala in two papers: “The Use of Transgenics in the Laboratory Axolotl” and “Gene and Transgenics Nomenclature for the Laboratory Axolotl – Ambystoma Mexicanum,” both published in the journal Developmental Dynamics.

In addition to Murawala, authors include Ji-Feng Fei of Guangdong Provincial People’s Hospital, Guangdong Academy of Medical Sciences, in Guangzhou, China, and, on the nomenclature paper, Tanaka and S. Randal Voss, Ph.D., director of the Ambystoma Genetic Stock Center (AGSC) at the College of Medicine at the University of Kentucky in Lexington, a federally funded center for the distribution of axolotl research animals.

“The ability of some animals to regenerate has fascinated observers for thousands of years, including early MDI Biological Laboratory investigators such as scientific luminaries Thomas Hunt Morgan and Richard J. Goss,” said Hermann Haller, M.D., president. “In his efforts to develop the axolotl as a model, Prayag is carrying on a long and venerable laboratory tradition of looking to nature to gain insight into human health.”

The axolotl, a Mexican salamander that is now all but extinct in the wild, is a champion of regeneration, with the ability to regenerate almost any body part, including brain, heart, jaws, limbs, lungs, ovaries, spinal cord, skin, tail and more. Gaining increased insight into the cellular and genetic mechanisms underlying this ability could lead to new treatments for traumatic injury, disease, congenital malformation and aging.

Most axolotl research is now focused on the question of fibrosis (scar formation) – or why axolotls regenerate limbs and tails while mammals such as mice and humans form a scar at the site of an injury. But because of its amazing regenerative capabilities, the possibilities for research in the axolotl are wide open, especially given the plethora of new tools that are becoming available to work with it.

“With these tools in place, we expect to see exponential growth,” Murawala said. “We only need to look at other animal models to get a sense of the variety of topics that can be studied. Most axolotl research is now focused on limb or tail regeneration, but there is also the opportunity to study regeneration in the brain, heart, lung, spinal cord and more. We are not running short on biological questions to investigate.”

The need for transgenic animals

While the axolotl has been a subject of study in vertebrate developmental biology for more than 150 years (most laboratory models are descendants of animals brought to Paris from Mexico in 1863), it has attracted renewed attention in recent years as a model in regenerative biology and medicine due to advances in the development of new genetic and genomic resources.

Among these are transgenic animals, or animals that have been genetically engineered for characteristics important for research. Using gene-editing techniques, researchers can, for instance, create animals whose cells are labeled with fluorescent tags, which allows them to study how cells behave under a fluorescence microscope; or animals in which genes have been “knocked out,” which allows them to study gene function.

Currently, few transgenic axolotls are available to U.S. and Canadian researchers from the AGSC – indeed, the lack of transgenic animals is one of the barriers to axolotl research cited in Murawala’s recent transgenics paper. But that is changing due to his establishment of mechanisms for the importation of transgenic animals to the United States from Tanaka’s and other European laboratories.

In addition to furthering research, the distribution of transgenic animals, which can take years to develop, also protects lines that are now available in only a few laboratories from being lost to potential pathogens or other catastrophes.

The need for uniform nomenclature

“If we want to exchange information, we have to have accurate and unambiguous communication, which is why standardized guidelines have to be put forward,” Murawala said. “If I call a gene one thing and you call it another, it will create confusion. Since the authors of our paper were heavily involved in developing axolotl gene assemblies and transgenic animals, we were in a good situation to write the guidelines.”

Another critical need is that of an online database similar to the FlyBase and WormBase databases used in the study of fruit flies and roundworms. Such a database would integrate the genetics, genomics and biological data essential for effective communication and sharing of results within the axolotl community and among those studying other salamander models with whom axolotls share characteristics.

In collaboration with laboratory scientists James Godwin, Ph.D., who also studies the axolotl, and Joel H. Graber, Ph.D., director of the computational biology and bioinformatics core, and in coordination with axolotl researchers across the world, Murawala is developing an “AxoBase” database that aims to unify axolotl-related resources on one website. The group expects to launch a basic website within the next few months, although developing a comprehensive database will take much longer.

The MDI Biological Laboratory as a center of axolotl research

Murawala’s work uniquely positions the MDI Biological Laboratory to take the lead in axolotl research in North America. In addition to Murawala and Godwin and its axolotl colony, it is distinguished by a vibrant visiting scientist program that can potentially afford researchers from around the world an opportunity to work with its repository of transgenic animals; a training laboratory, the Maine Center for Biomedical Innovation, in which young researchers can learn techniques for working with the axolotl, another critical need that has been identified by the axolotl community; and a campus ideally suited to hosting international conferences and symposia.

Indeed, Murawala hopes the laboratory will be the future site of the “Salamander Models in Cross-Disciplinary Research” conference, also known as the “salamander summit,” which was previously held at the Research Institute of Molecular Pathology in Vienna and Northeastern University in Boston and will be held online this month at the Center for Regenerative Therapies at TU (Technical University) Dresden in Dresden, Germany. All are centers of axolotl research.

Images for Murawala’s research were acquired using the equipment of the light microscopy facility at the MDI Biological Laboratory, which is supported by a Maine INBRE grant (GM 103423) from the National Institute of General Medical Sciences at the National Institutes of Health (NIH). Work in the Murawala laboratory is supported by grants from NIH-COBRE (5P20GM104318-08).