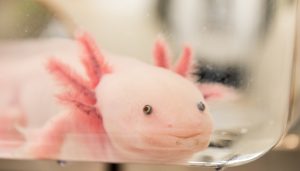 The scientists will talk about their research in model animals with astonishing abilities to repair and regenerate lost and damaged tissues and organs, such as the Mexican salamander, or axolotl. Their goal is to elucidate the genetic mechanisms of regeneration in these animals in order to develop therapies that activate the dormant genetic pathways for regeneration in humans.

The three free public lectures will take place at 7 p.m. at Maren Auditorium on the MDI Biological Laboratory campus in Bar Harbor on July 31, Aug. 3 and Aug. 9. Descriptions are below.

The increased incidence of degenerative diseases associated with the aging of the world’s population is shining a spotlight on regenerative medicine, which holds the potential to repair and replace tissues and organs that are lost or damaged as a consequence of age-related diseases — for instance, to regenerate heart muscle tissue after a heart attack or to replace a kidney damaged by kidney disease.

“This is an exciting time in regenerative medicine, which is on the cusp of developing new therapies for the treatment of diseases that are major causes of death and disability around the world,” said MDI Biological Laboratory scientist Voot P. Yin, Ph.D., course director. “In this series of lectures, leaders in the field will share their discoveries, scientific insights and visions for the future of the field.”

The MDI Biological Laboratory’s signature course brings students and leaders from around the world together to learn about the determinants of regenerative capacity, the causes of biological aging and strategies for applying what is learned to improve human health and advance regenerative medicine.

The three public lectures are as follows:

Larrain will discuss his research on Xenopus laevis, an African aquatic frog, the goal of which is to find new methods to promote spinal cord regeneration in mammals. Damage to the spinal cord in mammals such as humans rarely heals because damaged nerve cells fail to regenerate. Such research holds the potential to help patients regain lost spinal cord function.

The remarkable regenerative capacity of the tadpole of Xenopus laevis allows it to regenerate its spinal cord after injury, but it loses this capacity when it metamorphoses into a frog. Xenopus laevis therefore provides a unique model for the study of spinal cord regeneration, allowing scientists to compare the cellular and molecular differences between tadpoles that can regenerate and froglets that cannot.

When it comes to regeneration, salamanders are star performers. While all urodele amphibians (newts and salamanders) have some regenerative capacity, the axolotl, or Mexican salamander, can regenerate multiple structures like limbs, jaws, tail, spinal cord, skin and more without evidence of scarring throughout its life, making it a favorite model organism in regenerative medicine research.

Echeverri will discuss her work at the molecular and cellular levels to understand why axolotls can functionally repair their spinal cords after injury and mammals cannot. She is using transcriptional profiling to identify key differences at the microRNA level between the axolotl and the rat, a mammal, after spinal cord injury. In particular, she is studying how the axolotl creates a permissive environment for the regrowth of axons (nerve fibers), while mammals do not. Echeverri is also interested in understanding the genetic pathways for limb and tail repair, as well as those that let cells at a cut surface know what needs to be regenerated.

The 23rd Cserr Lecture is given in memory of Helen F. Cserr, Ph.D., a distinguished scientist and researcher who conducted research at the MDI Biological Laboratory for 20 summers, including on the topic that most interested her: the study of the blood-brain barrier in marine organisms. Her brilliant mind, the high quality of her research, her ability to attract top-notch students and her graciousness made her an invaluable member of the MDI Biological Laboratory community.

While some organisms are able to fully regenerate lost or damaged tissue, the response of humans and other mammals to serious tissue damage is limited to wound healing, which involves scar tissue formation (fibrosis) at the site of injury. While scarring helps retain the structural integrity of the tissue, it can cause a debilitating loss of function.

Seifert will discuss his research on the molecular mechanisms that regulate and direct the regenerative response to injury and how these mechanisms are curtailed in non-regenerating systems. In his studies of the integration of patterning, growth and cellular differentiation that occurs during regeneration in different animal models and systems, including the skin, digit and limb, he is seeking to determine if the regenerative response to injury recapitulates what occurs during embryonic development or if it is the result of the execution of a unique program.

In a more clinical context, he is seeking to apply current understanding of how tissue regeneration occurs in its natural state to new approaches to stimulating regeneration in humans.

The 35th Kinter Lecture is given in memory of William B. Kinter, Ph.D., an MDI Biological Laboratory investigator from 1963 until his death in 1978. His interest in the effect of toxic compounds on the environment led to landmark papers on the effect of pesticides on eggshell thinning in birds, and important studies on the physiological effects of environmental pollutants, including crude oil.