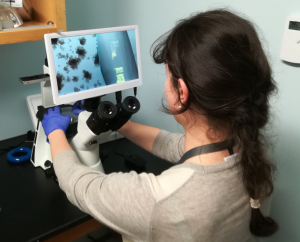 BAR HARBOR, MAINE — The MDI Biological Laboratory has announced that it received more than $70,000 in cash and in-kind awards for its inaugural “Applications of Organoid Technology” course, held May 27 through June 2 on the institution’s Bar Harbor campus.

The week-long course was among the first to provide extensive hands-on training in organoid culture, said course director Hugo de Jonge, Ph.D., a professor at Erasmus University Medical Center in Rotterdam, Netherlands. De Jonge has been a visiting scientist at the MDI Biological Laboratory since 2008.

The course was offered in partnership with Hubrecht Organoid Technology (The HUB), a non-profit organization based in Utrecht, Netherlands. The HUB was founded to  implement the pioneering work of Hans Clevers, M.D., Ph.D., who discovered methods to grow stem cell-derived three dimensional mini-organs from the tissues of patients.

“Organoid technology has tremendous potential for human health,” said Kevin Strange, Ph.D., president of the MDI Biological Laboratory. “By offering in-depth training in organoid culture, we are accelerating the adoption of an emerging technology that promises to revolutionize the way disease is studied and treated.”

The course attracted 25 scientists who are interested in using organoids for studying disease, for screening for toxicity and efficacy in pre-clinical drug development and — in perhaps the most intriguing application — for predicting an individual patient’s responsiveness to a specific drug or combination of drugs.

The participants included advanced graduate students, post-doctoral trainees and researchers from universities, medical schools, research institutions and technology companies in countries including Japan, Italy, Germany, South Africa, Spain, Thailand and Turkey. About 40 percent of the participants were from the United States.

The course used cultures from the Living Biobank at The HUB, which included organoids from patients with cystic fibrosis and various forms of cancer. The students also developed their own organoids from mouse cells.

“We would like to make organoid technology available to everyone,” said course director Silvia F. Boj, Ph.D., scientific director at The HUB. “But the technology is easier learned from training than from an experimental protocol. The good news is that once course participants have mastered the technique, their entire home institutions can benefit.”

Organoids grown from organ-specific adult stem cells, which is what were used in the course, maintain the genetic make-up and properties of the patient’s diseased tissue. They provide a platform for investigation that is more true to the disease than conventional two-dimensional cell cultures, but simpler than working with a patient.

The course grew out of research by de Jonge on cystic fibrosis in organoids derived from biopsies of human intestinal tissue. De Jonge was drawn to the use of organoids as a substitute for cells from the dogfish shark, which he had formerly used to study the disease. A benefit of organoids is that they can be used in place of animal models.

The course will be offered again in 2019. For inquiries about the 2019 “Applications of Organoid Technology” course, please email education@nullmdibl.org.