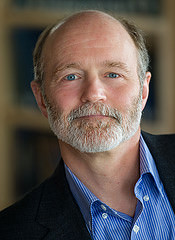 BAR HARBOR, MAINE — Kevin Strange, Ph.D., has announced that he plans to step down as president of the MDI Biological Laboratory when his current term ends in July 2018.

During his seven-year tenure, Strange focused the institution’s research activity in the fields of aging and regenerative biology; recruited a new generation of scientists to study the genetic mechanisms underlying aging and tissue repair and regeneration; oversaw the construction of a new multi-million-dollar laboratory building, with another new building now underway; and attracted more than $45 million in federal, state and private funding.

The Board of Trustees expressed deep appreciation and gratitude for the enormous strides that have been made by the institution under Strange’s leadership.

“Kevin’s contributions can’t be overstated,” said Dr. Peter J. Allen, the board’s chairman. “His decision to focus on the biology of aging and regeneration was transformative: not only has it propelled the institution to a position of international leadership in these rapidly emerging fields, it has also positioned the laboratory at the forefront of a field that promises to revolutionize the practice of medicine.”

According to Allen, the board of trustees will announce the formation of a search committee by Sept. 1 and will launch a national search for Strange’s replacement as president later this fall.

Research at the MDI Biological Laboratory under Strange’s leadership has centered on identifying the molecular mechanisms underlying aging and age-related degenerative diseases such as heart disease and Alzheimer’s rather than the “one disease, one drug” approach that characterizes most modern medicine – a focus that raises the prospect that treatments can be developed to prolong healthy lifespan in humans.

“We have come much further than I ever would have expected in such a short time,” Strange said of the laboratory’s achievements. “We’ve transformed from a seasonal marine research station to a growing independent research institution with a unique and cutting-edge focus in regenerative medicine. We’ve greatly expanded our facilities; launched a company that is developing small molecules to treat heart, nerve and muscle disease; attracted many new supporters; and now have a rapidly growing national and international reputation that reflects the impact of our research and education programs.”

“As gratifying as presiding over these achievements has been, they wouldn’t have happened without an outstanding faculty and staff and the commitment of a devoted group of supporters and benefactors,” he continued. “I’m enormously proud of what we’ve accomplished together. The MDI Biological Laboratory is pointed in the right direction and now has enormous momentum. The remarkable success of the institution over the last seven years will help attract the next generation of new leadership who will bring fresh energy and perspective to keep that momentum going.”

One of Strange’s major achievements was the 2013 designation of the institution by the National Institutes of Health (NIH) as a Center of Biomedical Research Excellence (COBRE) in regenerative biology and aging, a designation accompanied by nearly $13 million in biomedical research funding over five years. The designation was a direct result of Strange’s decision to refocus research activities in these fields. The center and its achievements were highlighted in the NIH 2017 congressional budget request as the single example of the type of important scientific advances and programs the COBRE funding mechanism supports.

Another achievement was the formation of Novo Biosciences, a start-up company focused on moving laboratory discoveries into medical practice. Under the leadership of Strange, who has emphasized this “translational” focus, researchers have identified three small molecules with potential applications in human health that the institution is now moving toward clinical trials through Novo Biosciences. As a result of this focus on translating discovery into cures, Strange was named by Mainebiz, the state’s leading source of business news, as one of the 10 innovative Maine business people who were “shaping the future of Maine’s economy” in 2013.

Under Strange’s leadership, the MDI Biological Laboratory has also greatly expanded its education activities and contributed to Maine’s economy by bolstering the state’s biomedical workforce through its leadership of the Maine INBRE (Idea Network of Biomedical Research Excellence) program, a network of 13 Maine biomedical and research institutions whose goal is to build a biomedical R&D culture in Maine.

“Kevin contacted me in early 2009 before he officially became president and asked me if I would join the MDI Biological Laboratory’s Board of Scientific Counselors, which he was just forming,” said Alejandro Sánchez Alvarado, a Howard Hughes Investigator at the Stowers Institute for Medical Research and a Fellow of the American Academy of Arts and Sciences.  “In our first conversation, he described for me the bold vision he had for transforming what had been a seasonal marine research station for over a hundred years into a world-class, independent research institution pioneering a unique focus in regenerative biology and medicine.”

“The challenges he faced, including being in the middle of the great recession, were enormous,” Sánchez Alverado continued. “There are very few people in academia who would take on such a monumental and risky endeavor, and even fewer who could pull it off.  Kevin’s remarkable success and his decision to step away in the midst of that success speak volumes about who he is as a person, scientist and leader.”

Strange became the institution’s first full-time director and president in July 2009 after a distinguished career as an NIH-funded biomedical scientist and leader at Harvard Medical School and Vanderbilt University School of Medicine. An expert in the field of cellular stress biology, he leads groundbreaking research into how proteins are damaged by environmental stressors.

Upon stepping down as president, he will continue to serve as director of the Center of Biomedical Research Excellence program, participate in all aspects of junior faculty career development, manage his own NIH-funded research laboratory and grow and manage Novo Biosciences. “I’m not sure what I’ll do with all my free time once I only have three jobs to do,” he quipped.