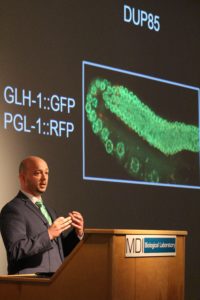 BAR HARBOR, MAINE — Only a year and a half ago, Heath Fuqua was living in a truck fitted out as a camper and trying to figure out what he was going to do with the rest of his life after eight years in the army, much of it spent in the Middle East. Today, he’s on track to become a research physician specializing in the neuroscience of aging.

Fuqua is a member of the inaugural group of students from College of the Atlantic (COA) in Bar Harbor, Maine, to participate in an academic year fellowship program at the MDI Biological Laboratory, also in Bar Harbor. Since the program was launched in the spring of 2016, four students have taken part.

The fellowship is funded through a federal grant from the National Institutes of Health for the Maine INBRE (IDeA Network of Biomedical Research Excellence) program, which exposes undergraduates to the rewards of a career in biomedical research by providing them with opportunities to work in a real-world laboratory environment.

“My case represents an ideal example of the success of Maine INBRE,” said Fuqua. “The program was totally instrumental in focusing my future on biomedical research. Without INBRE, I never would have been doing what I’m doing.”

Fuqua’s first exposure to the MDI Biological Laboratory was through his participation in a one-week course in early 2016. His experience in that course, which was focused on molecular biology, inspired him to apply for an academic year fellowship at the laboratory, followed by a summer fellowship.

Today, he works part time as a research technician in the laboratory of MDI Biological Laboratory scientist Dustin Updike, Ph.D., while pursuing his undergraduate degree at COA. Updike studies specialized particles called germ granules in the tiny roundworm, C. elegans, to learn more about the fundamental biology of stem cells in human beings.

COA students have been doing academic year fellowships at The Jackson Laboratory under the INBRE program for several years. The college encourages such outside-the-classroom experiences across all levels and disciplines.

“The most amazing benefit of INBRE is the opportunity to send students to these world-class research institutions,” said Chris Petersen, COA associate academic dean and biology professor. “As freshmen, three of the students who started at the MDI Biological Laboratory last year never would have had such an opportunity at most colleges.”

The goal of INBRE is to strengthen Maine’s capacity to conduct NIH-competitive biomedical research. The program provides research support and core facilities to junior faculty, creates research and training opportunities for undergraduate and graduate students and serves as a pipeline for students pursuing careers in biomedical research.

Since the program’s inception, more than 2,100 Maine undergraduates have received biomedical research training at the MDI Biological Laboratory through INBRE courses, as well as summer and now academic year fellowships. More than 90 percent of those who graduate have pursued biomedical careers, many in Maine.

The MDI Biological Laboratory is an independent, non-profit biomedical research institution focused on the study of aging and regenerative biology and developing Maine’s skilled workforce through hands-on scientific training.

“This program fosters interaction between two outstanding Mount Desert Island institutions while providing students with the authentic research experience they wouldn’t get in a classroom,” said the laboratory’s assistant director of education, Christine Smith. “The participants really feel they have ownership of a project.”

“I like the freedom to pursue my own ideas and discoveries,” agrees Rose Besen-McNally, a COA academic-year fellow who studies wound healing with laboratory scientist Vicki P. Losick, Ph.D. “It’s pretty amazing that as a student at a small college on an island in Maine I have the opportunity to work in such a world-class laboratory.”