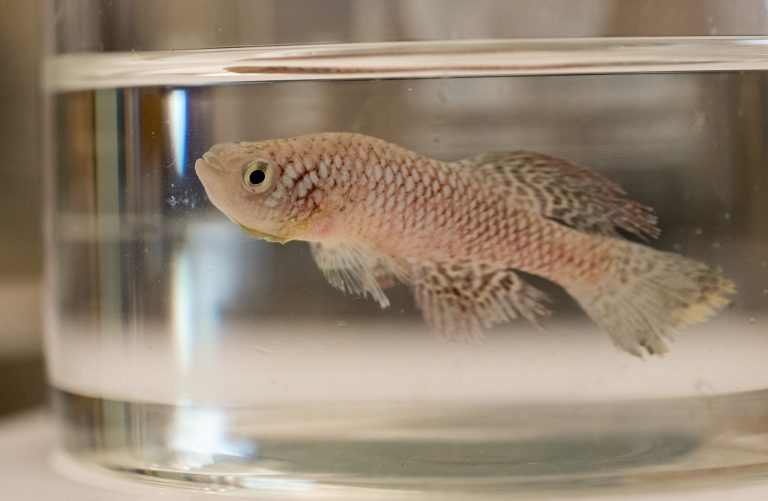 The MDI Biological Laboratory sponsored the inaugural International African Turquoise Killifish Conference in September, which was dedicated to the furtherance of the African turquoise killifish as an animal model for the study of of aging and regeneration.

BAR HARBOR, MAINE — While it’s the elephants and other large animals that congregate at East African waterholes which capture the attention of safari-goers, the most fascinating inhabitant of these ephemeral pools may be a tiny, guppy-like fish called the African turquoise killifish or ATK (Nothobranchius furzeri).

Also known as the “instant fish” because of its brief lifespan, the ATK grows, reproduces and ages during the four- to six-month window of the rainy season, an adaptation to its extreme habitat that makes it makes it among the shortest-lived vertebrates in existence.

It is also a valuable model for studying the biology of aging. Though other animal models used in aging research such as the fly and worm have short lifespans – the roundworm, Caenorhabditis elegans, lives for only three weeks, for example – they aren’t vertebrates, like humans. And mammalian models such as mice or primates live too long to get quick results – decades in the case of primates.

The ATK bridges this gap by allowing rapid insight into the effectiveness of anti-aging interventions while also displaying traits relevant to human aging, including vertebrate-specific genes, tissues and organs and a complex immune system. The ATK also can regenerate its caudal fin and heart, which is a benefit for scientists studying the link between aging and regeneration, the research focus at the MDI Biological Laboratory.

In an effort to unite the community of scientists working with this emerging model and to foster the development of tools and resources to work with it, the MDI Biological Laboratory sponsored an inaugural International African Turquoise Killifish Conference in September that attracted about 50 scientists from countries including Belgium, China, Czechoslovakia, German, Italy, Japan and the United States.

Though several ATK conferences have been held in Europe, this was the first to be held in the Americas. Plans call for the conference to be held again in 2022 and to alternate with the European Nothobranchius Symposium in Europe in even years after that. Though this year’s conference was held online due to the COVID-19 pandemic, plans call for future conferences to be a hybrid of in-person and virtual formats.

The ATK conference was an outgrowth of conferences on aging and regeneration held at the laboratory in past years that attracted pioneers in the use of the ATK as a research model, several of whom also attended the ATK conference.

“The ATK conference was a natural for us because of our research focus on aging and regeneration,” said Hermann Haller, M.D., president of the MDI Biological Laboratory.  “But it also made sense in other ways: we have a facility that is well-suited for hosting conferences, a commitment to knowledge-sharing on an international basis and a distinguished history of using comparative biology to gain insight into human health.”

The interface between aging and regeneration is an area of increased biomedical interest, Haller noted. While the goal of aging research is to prevent or delay the onset of degenerative disease, the goal of regenerative medicine research is to repair the damage that occurs. The laboratory’s new ATK colony, which was established last year, offers faculty and visiting scientists the opportunity to study both in one model.

Though research at the MDI Biological Laboratory is focused on the interface between aging and regeneration, the subject matter of the conference was wide ranging, including presentations on ATK behavior, development, ecology, evolution, habitat, husbandry and reproduction, as well as on studies in which it was used as a model for age-related diseases and conditions such as neurodegenerative disease.

“The conference answered a real thirst in the community of ATK researchers, many of whom are new to this animal model,” said MDI Biological Laboratory scientist Aric Rogers, Ph.D., who co-chaired the event with Chi-Kuo Hu, Ph.D., of Stony Brook University in New York. “The commitment of the participants to the use of the ATK as a research tool and their eagerness to share their knowledge was remarkable.”

“Yesterday was an eye-opener for me,” concurred Luc Brendonck of Katholieke Universiteit Leuven in Belgium, speaking on the second day of the two-day event. “It definitely widened my view on the different types of molecular research taking place in the African turquoise killifish species.”

Though prized by aquarium hobbyists since the 1970s, it wasn’t until the 2000s that the ATK attracted the notice of scientists in search of a vertebrate model in which lifespan was naturally compressed, rather than truncated by disease or predation. In fact, an advantage of the ATK is that it shares many symptoms of aging with humans, including a decline in immune function and a loss of muscle mass, even memory loss.

One of the first to use it as a model was conference participant Alessandro Cellerino, Ph.D., now of the Leibnitz Institute on Aging in Germany. Cellerino is said to have been visiting with a fish breeder in Italy in the 2000s when he asked which species was the shortest-lived. When the breeder pointed out the ATK with the comment “They don’t make it any longer than three months,” Cellerino replied “OK, I want them.”

In addition to its short lifespan, the ATK elicits scientists’ interest because the embryos enter a state of suspended animation called diapause when the water in the pools in which it lives dries up. Because the aging clock is slowed during this period, which in the case of drought can be prolonged, the study of diapause could provide new insights into strategies to preserve organs and tissues during aging.

One of the goals of the conference was to bring the global community of scientists who work with the ATK together in order to advance it as a laboratory model. In this, it was a huge success: participants traded notes on husbandry; shared laboratory protocols, resources and tools; launched plans to implement an online communications forum; and in general charted a course for the future.

“The ATK has been around for a while, but its use as a model in scientific research is still relatively new,” Rogers said. “When you’re starting with such a small group, you have to be willing to help one another and to share resources. The conference marked the golden beginning of the establishment of the ATK as a central model system – it’s not a golden age yet, but it was definitely a golden beginning.”