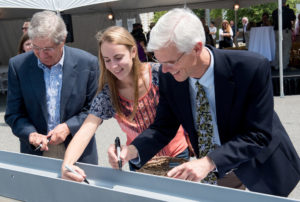 BAR HARBOR, MAINE — The MDI Biological Laboratory in Bar Harbor, Maine, held a groundbreaking ceremony today for a new 6,560-square-foot training laboratory that will double the laboratory’s capacity to provide hands-on training for students and teachers in biomedical research each year.

The two-story building will house a 2,476-square-foot training laboratory on the first floor, as well as classroom and meeting space on the second floor. The facility will support training for students and science professionals, a new focus on bioinformatics (the storing, organizing and analyzing of biological data), stronger regional educational collaborations and new initiatives with Maine biotechnology companies.

About 115 elected officials, community leaders, trustees, students and staff attended the ceremony, which was followed by a ceremonial signing of a steel beam which will be used to “top off” the building.

“We have an impressive track record for delivering the kind of hands-on research training that is essential for growing Maine’s biotechnology economy,” said Kevin Strange, Ph.D., president. “Since 2001, our programs have provided training to more than 2,100 Maine students. The new laboratory will allow us to continue to build the state’s biomedical workforce and strengthen our research and development sector.”

Among the speakers was Dr. Peter J. Allen, the chairman of the institution’s Board of Trustees and a surgical oncologist at Memorial Sloan Kettering Cancer Center in New York, who contrasted the rich offerings of the institution’s educational programs with the lack of opportunities to pursue his interests in science that he confronted as a student growing up in Maine.

“The MDI Biological Laboratory is committed to training the next generation of scientists and workers in the biomedical research sector,” he said. “This building represents a real expansion of those opportunities. The chance to learn the details of how to perform science directly from scientists and to be able to take responsibility for their own work is one that is available at very few other places.”

The new laboratory is being funded by a $3 million state bond issue passed by Maine voters in 2014 to bolster Maine’s biotechnology sector. That funding is being matched by $5.7 million in public and private funds to cover the recruitment of three new biomedical research teams.

The new laboratory will free up approximately 1,700 square feet in the Kathryn W. Davis Center for Regenerative Biology and Medicine for the recruitment of two new research groups, which are key to fulfilling the institution’s five-year strategic plan, to expanding its drug discovery and development activities and to enhancing its position as a global leader in research on aging and the repair and regeneration of tissues.

The contemporary design of the building, which occupies an oceanfront site overlooking Upper Frenchman Bay, reflects the vision for the future of the institution while also paying homage to the past by retaining elements of the existing cottage-style architecture. A highlight is the abundant use of glass, which will allow for increased use of natural light, a connection to the natural world and access to the outstanding views.

Plans call for the building to be completed by mid-March of 2017.