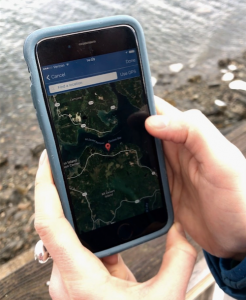 The free app is an outgrowth of Anecdata.org, an online citizen science portal for collecting and sharing environmental data. The portal is now being used worldwide by organizations such as the South Carolina Aquarium and Mass Audubon after being developed by MDI Biological Laboratory faculty and staff to crowd-source data in an effort to identify, locate and remedy environmental threats in the region of Mount Desert Island, Maine, where the institution is located.

Anecdata.org is now home to 60 projects, with examples including projects to track the disappearance of eelgrass from Maine’s coastal waters; track “king,” or exceptionally high, tides in the Gulf of Maine; and survey the decline of the eastern meadowlark in North America. The new app will make it quick and easy for participants to receive notifications from projects and share observations from the field.

“The continued growth of citizen science and its ability to influence policy depend upon the development of easy-to-use tools,” said Jane E. Disney, Ph.D., an MDI Biological Laboratory faculty member and a leader in the citizen science field for 25 years. “The Anecdata.org portal and mobile app replace antiquated systems that make data difficult to access, analyze and export, and that are subject to error.”

Disney envisions a wide range of uses for the mobile app, including in corporate, public health and government initiatives. The data that is collected will feed into the Anecdata.org site, where it will be available to everyone.

“Citizen science is the wave of the future,” Disney continued. “We are in an era of big data: it’s impossible for individual researchers to collect data on the scale needed to inform decision-making about human impacts on the environment and other serious public issues. The availability of the Anecdata.org mobile phone app makes crowdsourcing environmental data in the field that much easier.”

The Anecdata.org mobile app is based on a customized mobile app that the MDI Biological Laboratory team developed for the South Carolina Aquarium in Charleston, which allows citizen scientists to log data on discarded plastic found on beaches and waterways. The app supports the aquarium’s mission of keeping plastic pollution out of the oceans, where it threatens loggerhead sea turtles and other marine life.

The development of the Anecdata.org mobile app was funded in part through the Pittsburgh, Pa.-based Alex C. Walker Educational and Charitable Foundation, which provides funding for innovative solutions that promote sustainable economies and protect the ecosystems that contribute to national prosperity. The Walker Foundation is also funding the continued development of the Anecdata.org portal.

In addition to developing the free Anecdata.org mobile app, the MDI Biological Laboratory team will continue to develop customized web and mobile apps based on the Anecdata.org portal such as that developed for the South Carolina Aquarium. That app has been instrumental in gathering data that has led to the implementation of regulations to protect marine life from plastic pollution.

“The work that the MDI Biological Laboratory is doing represents a paradigm shift for science,” said Albert George, who has been deeply involved in the plastic pollution project as director of conservation for the South Carolina Aquarium. “Without the input from citizen scientists, we wouldn’t be able to gather the data needed to address environmental pollution, climate change and other pressing problems.”

Additional funding for development of the Anecdata.org portal comes from the Maine Technology Institute, an industry-led, publicly-funded, nonprofit corporation that offers early-stage capital and commercialization assistance for the research, development and application of technologies with the potential to generate high-quality jobs across Maine.

A launch party for the Anecdata.org mobile app at which participants will use the app to capture photos of a king tide will be held on Feb. 1 at the Bar Harbor Port Security Building at the Bar Harbor Municipal Pier. The program will include a discussion of king tides and a walk-through of the app from 10 a.m. to 10:45 a.m., followed by use of the app to capture photos of the 13.3-inch high tide, which will occur at 10:58 a.m.

Those who would like to attend should pre-register (http://bit.ly/2qTjZHx). For more information, please email Community Lab Program Coordinator Anna Farrell at afarrell@nullmdibl.org.