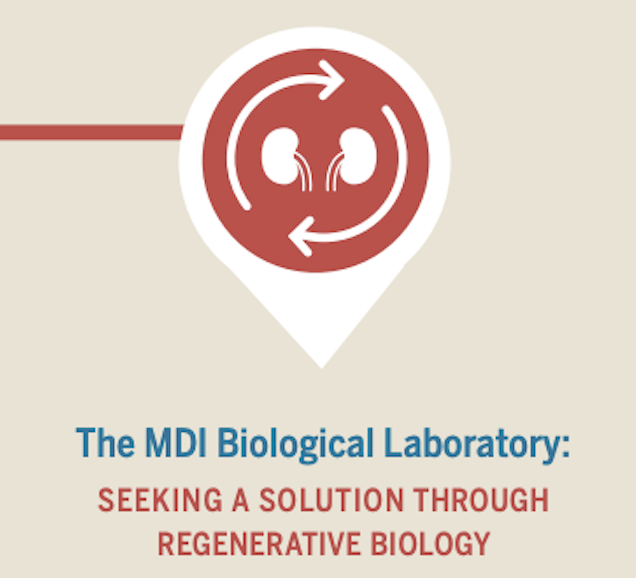 The funds will support research by members of the (Re)Building a Kidney (RBK) consortium, a collaborative of nearly 100 scientists at institutions throughout the United States and world. Iain Drummond, Ph.D., a professor at the MDI Biological Laboratory and director of its Kathryn W. Davis Center for Regenerative Biology and Aging, is one of three principal investigators; he is also a member of the RBK steering committee.

The other two principal investigators are Leif Oxburgh, D.V.M., Ph.D., director of the Kidney Regenerative Medicine Laboratory at the Rogosin Institute, an institute for the research, treatment and prevention of kidney disease affiliated with the NewYork Presbyterian Regional Hospital Network; and Denise Marciano, M.D., Ph.D., an associate professor at UT Southwestern Medical Center in Dallas, Texas.

Both Oxburgh and Marciano have been summer visiting scientists at the MDI Biological Laboratory, as have RBK investigators Thomas Carroll, Ph.D., and Ondine Cleaver, Ph.D., also of UT Southwestern Medical Center.

“The task of creating kidney replacement tissue takes a multi-institutional initiative because of its complexity, which I compare to that of the Apollo project,” said MDI Biological Laboratory President Hermann Haller, M.D., a nephrologist who conducts research on kidney vascularization. “We are delighted that under Iain’s leadership the MDI Biological Laboratory will play a leading role in this effort.”

The grant builds upon the advances of the first five years of the RBK consortium, which laid the foundation for the development of replacement kidney tissue by creating human-derived kidney replacement tissue in the form of a three dimensional mini-organ called an organoid or a “kidney in a dish” that can be transplanted, or engrafted, into a host such as a mouse and potentially scaled to create an artificial human kidney.

Such organoids are created from induced pluripotent stem cells (iPSCs), which represent a major advance in the biological sciences because they allow cells derived from skin or blood to be reprogrammed back to an embryonic pluripotent state from which they can be coaxed into differentiating, or transforming into, any type of cell in the body, including the more than 30 cell types in the kidney.

The challenge of the RBK consortium’s second five years will be to induce engrafted kidney replacement tissue to function, which involves creating “plumbing” that is integrated with that of the host organism in order to allow for the outflow of waste. Drummond, whose research deals primarily with the plumbing problem, compares it to that of connecting a new pipe to an existing system.

The three principal investigators are each tackling a different aspect of the challenge of creating a new kidney. The grant includes approximately $173,000 for the Rogosin Institute, where Oxburgh is making organoids, and approximately $225,000 for UT Southwestern Medical Center, where Marciano is studying the cellular and molecular mechanisms driving kidney development in cell cultures, as opposed to animal models.

Other RBK scientists representing various scientific approaches, disciplines and directions of inquiry are working under separate funding on a range of related projects, including the important task of bioengineering three-dimensional scaffolds, or artificial structures mimicking the architecture of the kidney, that can be recellularized with kidney tissue in order to create replacement organs.

Such scaffolds are necessary because organoids cannot be grown large enough to replace an entire kidney and because they lack the structural integrity required for integration into the human body.

The need for kidney replacement tissue is critical. In the United States alone, 15 percent of adults, or about 38 million people, have chronic kidney disease, and the incidence is growing due to the prevalence of diabetes and high blood pressure, which are major risk factors. The need is exacerbated by the fact that treatments for end-stage renal disease are limited, with dialysis and transplantation being the only options.

“The shame of the field is that there hasn’t been a terrific amount of progress beyond dialysis and transplantation,” Drummond said. “The sad fact that 10 to 20 people die each day while waiting for a transplant creates a real urgency to do something about it. That’s what drives my work and that of my colleagues. I am confident we are not all that far away — it may just be a matter of tweaking the system.”

Though quick to point out that breakthroughs often take longer than expected, Drummond believes science is less than 10 years away from creating functional kidney replacement tissue. His optimism derives from the animal he studies, the zebrafish, which can regenerate nephrons, the functional units of the kidney, using stem cells and genetic signaling very similar to those involved in human embryonic development.

The mission of Drummond’s team is to “turn a mouse into a fish” by studying how the zebrafish regenerates nephrons and recreating those circumstances in mammals such as the adult mouse that lack this ability. Specifically, his work focuses on the cellular and molecular signals that induce the creation of new nephrons and that guide the process of interconnection with existing kidney tubules.

“We’ve made great strides in making tissue,” Drummond said. “We’ve figured out how to make embryonic stem cells and turn them into kidney cells. But the challenge is getting such a complicated system to work and scaling it to the point where it is capable of filtering 180 liters of fluid a day, which is the capacity of two human kidneys. We know fish can do it. Let’s make mice do it — and then let’s make humans do it.”

Drummond looks forward to establishing the MDI Biological Laboratory as a hub for the study of kidney replacement tissue through international collaborations and conferences, and through its summer visiting science program, which provides a “sanctuary” from daily pressures — to use his phrase — for RBK scientists to define an efficient, synergistic agenda for creating new kidneys.

He also notes that the laboratory’s role in the RBK consortium is a fitting second act to its historical achievements in kidney physiology. Laboratory scientists Homer W. Smith, D. Sci. (1895-1962), and E.K. Marshall Jr., M.D., Ph.D. (1889 to 1966), are considered giants in the field for their work in elucidating how the kidney performs the complicated function of removing waste and excess fluid from the body.

“Having achieved proof of principle by creating kidney replacement tissue, our objective is now to demonstrate that kidney replacement tissue has a measurable impact on kidney function,” Drummond said. “The knowledge of kidney physiology established at the MDI Biological Laboratory in the 20th century by the greats like Smith and Marshall will be instrumental in achieving that goal.”