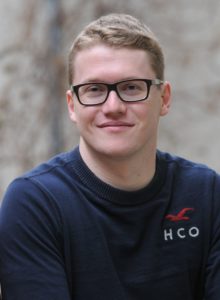 BAR HARBOR, MAINE – The role of dietary restriction in extending lifespan is the subject of research being conducted at the MDI Biological Laboratory in Bar Harbor, Maine, by visiting scientist Markus Schosserer, Ph.D., of the biotechnology department at the University of Natural Resources and Life Sciences, Vienna, in Austria.

Schosserer will be spending two months in the laboratory of Aric Rogers, Ph.D., at the MDI Biological Laboratory’s Kathryn W. Davis Center for Regenerative Biology and Medicine studying the role that molecular regulators of gene expression play in longevity—and in particular how these regulators are affected by lower amounts of food or food with lower energy content.

The MDI Biological Laboratory is an independent, non-profit biomedical research institution focused on increasing healthy lifespan and increasing our natural ability to repair and regenerate tissues damaged by injury or disease. The institution develops solutions to complex human health problems through research, education and ventures that transform discoveries into cures.

For many years, scientists have viewed the ribosomes of the cell as being something like a decoding machine—creating new proteins based on directions in the genetic code. But science is finding that in some cases the ribosomes, rather than serving as static molecular decoders, play an active role in altering those directions. Schosserer is investigating the role this molecular machinery plays in aging.

Schosserer, who has previously done research in human cells and several animal models, will be working with C. elegans, a roundworm used to study aging in the Rogers laboratory. Because C. elegans shares many of its genes with humans, scientists can apply what is learned from its study to extend human health and longevity. C. elegans also has a short lifespan compared to models like mice, which means that studies can be concluded in weeks, rather than years, and are much more cost effective.

“This collaboration fits in very well with our approach, which is to use diverse animal models to study the basic mechanisms of aging and tissue regeneration,” said assistant professor Aric Rogers, Ph.D. “The role of triggers in the cell’s genetic machinery is a fruitful new avenue of research. But in order to understand how these molecular processes work, it’s critical to study them in a variety of organisms.”

Schosserer’s studies focus on the role of the loss of the NSUN5 gene in increasing lifespan. His research in Austria has demonstrated that NSUN5 might act as a trigger in the process of gene expression by the ribosomes. In his work at the MDI Biological Laboratory, he is testing the theory that NSUN5-mediated lifespan extension is dependent on reduced food intake.

“Dietary restriction has been known since the 1930s to extend lifespan and retard age-related chronic diseases in a variety of species, including rats, mice, fish, flies, worms and yeast, but the mechanisms by which dietary restriction extends lifespan are still unclear,” Schosserer said. “It’s tempting to speculate how we might tap into a program that already exists in our genes to improve the health of our aging society.”

Schosserer’s research complements Rogers’ work on the role of dietary restriction in aging. Rogers studies how gene expression is remodeled under conditions that extend lifespan in C. elegans. In addition to aging, Rogers’ work on the genetic variations and environmental conditions that increase longevity also has relevance for the treatment of age-related diseases such as diabetes, cancer and neurodegeneration.