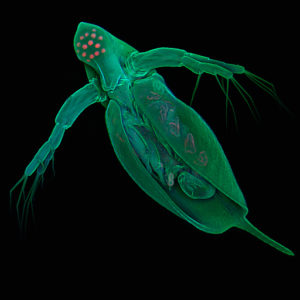 BAR HARBOR, MAINE – Scientists have long known that many diseases have a strong genetic component, but they are only recently paying more attention to the role played by the relationship between genetics and the environment.

The study of how genetic function is influenced by manmade environmental stress at a population level is the subject of a course entitled “Environmental Genomics” to be held at the MDI Biological Laboratory in Bar Harbor, Maine, July 30 through August 6, 2016. The course is attracting doctoral students and early career scientists from around the world who are interested in this emerging multidisciplinary specialty, which encompasses elements of biology, biostatistics, ecology, evolution, informatics and toxicology.

Scientists in the field of environmental genomics are identifying the genes and regulatory patterns that allow some organisms to quickly adapt to rapid environmental changes – a response known as phenotypic plasticity. The field has huge implications for human health by enabling the development of tools that will allow medicine to identify and treat individuals who are susceptible to environmental stressors — for example, those who are susceptible to asthma in a city with high levels of air pollution.

The new discipline has been made possible by advances in genomics, automated sample preparation and other technologies that allow scientists to conduct large-scale studies to assess how entire populations respond to environmental challenges at a genetic level.

“Some organisms can tolerate harmful environmental stimuli, while others fall victim to disease,” said MDI Biological Laboratory senior staff scientist, Benjamin L. King, Ph.D., a director of the course. “The goal of environmental genomics is to understand why. Humans are also encountering environmental challenges – from polluted air to contaminated water to changing lifestyles. We can use the insight we gain from model organisms to help us adapt to our rapidly changing environment.”

The MDI Biological Laboratory in Bar Harbor, Maine, is an independent, nonprofit biomedical research institution focused on increasing healthy lifespan and harnessing the natural ability to repair and regenerate tissues damaged by injury or disease. The institution develops solutions to complex human and environmental health problems through research, education and ventures that transform discoveries into cures

The Environmental Genomics course is one of three bioinformatics courses being offered by the MDI Biological Laboratory this year. The growing field of bioinformatics has become a focus of the institution’s educational offerings in response to the need to develop new computational tools to analyze the large amounts of data that are being generated as a result of the development of “high throughput” tools to quickly conduct millions of tests — in this case, genetic data on large populations.

The course will compare the genetic “fingerprints” of two populations of Daphnia pulex, a common water flea. Course participants will evaluate the genetic differences between populations that have flourished in a lake near Sudbury, Ontario, that is heavily polluted by acidification and heavy metals such as copper and nickel as a result of years of industrial-scale smelting operations — what King calls “super Daphnia” — and those that live in a clean environment upwind of the smelting facility.

Daphnia is used as a model because the tiny crustaceans are integral players in healthy ecosystems, are tolerant of environmental challenges and are widely used as a test species in both regulatory toxicity testing and functional genomics studies.

The course is partially funded through the National Institutes of Health’s “Big Data to Knowledge” (BD2K) initiative, whose aim is to advance the understanding of human health and disease by developing new tools, increasing accessibility to data and enhancing training in big data science.