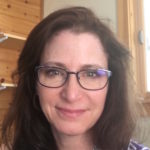 BAR HARBOR, MAINE — Neuroscientist Andrea R. Tilden, Ph.D., is spending her sabbatical year from her position as the J. Warren Merrill Associate Professor of Biology at Colby College in Waterville, Maine, as a visiting scientist in comparative genomics at the MDI Biological Laboratory.

Tilden is using the science of bioinformatics, also referred to as computational biology, to study how genomes evolve, and what science can learn about human health and disease from the study of nonhuman genomes such as that of the tiny water flea, Daphnia pulex, a ubiquitous fresh water crustacean.

Bioinformatics is the science of mining the vast amounts of biological data that are being generated as a result of the rapid development of new genetic tools for answers to longstanding or perplexing questions in the biological sciences.

Tilden uses Daphnia, the only crustacean whose genome has been fully sequenced, as a model to study the genetic mechanisms underlying circadian, or body clock, rhythms, which regulate physiological processes. She is also seeking to identify the role in Daphnia of noncoding DNA, or DNA with no apparent function.

“We are delighted that Dr. Tilden is joining our team,” said Kevin Strange, Ph.D., president of the MDI Biological Laboratory. “The use of bioinformatics has become an important focus of our research. We welcome Dr. Tilden’s ability to extract new insights into important biological processes from the growing volume of genomic data.”

Tilden will also work with laboratory scientist James A. Coffman, Ph.D., with whom she shares interests in circadian processes, stress responses, endocrinology and aging. In that research, she will use the zebrafish as a model to study how exposure to chronic stress early in life can lead to increased vulnerability to disease as an adult.

Her interest in bioinformatics is an outgrowth of these visits. She was drawn to the visiting scientist role by the chance to brainstorm with computational biologists on the institution’s faculty, and by the opportunity for time away from her teaching responsibilities to write papers on data she has been collecting for several years.

“Despite the fact that I share many interests with other Colby faculty, the busy schedules of the academic year don’t allow for interaction with other scientists of the type that occurs at the MDI Biological Laboratory,” she said. “The chance to devote one’s time strictly to science in such an inspiring setting is one that I deeply value.”

After earning a doctorate from the University of Oklahoma, Tilden taught at Macalester College in Saint Paul, Minn., before returning to Maine to teach at Colby. “If you’re from Maine, you tend to want to come back,” she said. The position at Colby, an INBRE partner, led to her earlier study of bioinformatics at the MDI Biological Laboratory.

She is fascinated by the opportunity to use bioinformatics to gain a greater understanding of circadian rhythms, which regulate physiological processes including temperature, brain wave activity, hormone production and cell regeneration — even memory formation. She compares the addictive nature of bioinformatics to gaming.

“My son, who is 12, plays a video game called Minecraft,” she said. “Sometimes we sit side-by-side — he is playing Minecraft and I am doing computational biology.”

Tilden will also use her sabbatical to pursue her interest in art. She uses the familiar Etch A Sketch® toy to create intricate drawings, each of which takes up to 70 hours to complete. Once she has completed a drawing, she disassembles the Etch A Sketch® and removes the inner mechanism to permanently preserve the finished artwork.

Her drawings are now on display the Kinne Library in the MDI Biological Laboratory’s Morris Building.