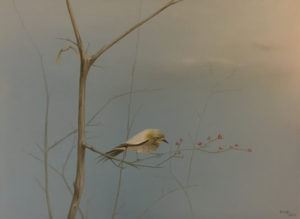 BAR HARBOR, MAINE – The relationship between sight and subject will be the topic of a talk entitled “Bearing Witness” by Mount Desert Island painter Ben Lincoln at an Art Meets Science Café to be held at the MDI Biological Laboratory’s Kinne Library at 5 p.m. on Monday, July 18, 2016.

Lincoln, who works in a studio in Pretty Marsh once used by his father to build hand-made wooden boats, is known for a series of oil paintings inspired by sailboats and the wind, which he views as a metaphor symbolizing “our continuing attempts to harness and ultimately find a balance with the forces of the natural world.”

The Art Meets Science Cafés are offered by the MDI Biological Laboratory in fulfillment of its mission to increase public engagement with science. The cafés follow the format of the popular MDI Science Cafés, also offered through the laboratory, in which short presentations are followed by lively, informal discussion.

The natural world – and the science that explains it – has always informed Lincoln’s work. Since before he began his art education at the School of the Museum of Fine Arts in Boston in 1989, scientific subjects such as medical illustrations, quantum mechanics, string theory and genetics have exerted a strong influence on his imagery.

In his presentation, Lincoln will ask “What does it mean to observe?” He will present images representing different models of observation and explore the scientific, artistic and philosophical relationships between sight and subject. In particular, he will discuss how science has revealed this to be a complex relationship.

“Relativity, quantum mechanics and more recently, string theory, present a complicated picture,” he says. “Space and time are curved, particles can pop in and out of existence, the simple act of observation alters the behavior of particles and we may inhabit only one of a potentially infinite number of parallel universes.”

Lincoln is also exhibiting his paintings in the laboratory’s 2016 Art Meets Science exhibit. The paintings on exhibit will include a Cape May warbler, an example of the direct observation of nature; a hurricane-chasing airplane, an example of using observational tools; and an allegorical work, an example of observing the inner self.

Lincoln’s works have been exhibited in numerous solo and group exhibitions, including in past Art Meets Science exhibits at the MDI Biological Laboratory, and are included in private and corporate collections around the world.

Attendees at the July 18 Art Meets Science Café will have the opportunity to view the Art Meets Science exhibit starting at 4:15 p.m. on the day of the café. The exhibit includes observations by artists on nature, from the stunning scenery of Acadia to the microscopic world of molecular biology.

Art Meets Science Cafés, which will alternate every Monday at 5 p.m. in the laboratory’s Kinne Library with MDI Science Cafés through Sept. 19 (except for Labor Day), are free and open to the public. Light refreshments will be available.

The next Art Meets Science Café will be held on Monday, Aug. 1, 2016. The speaker will be art historian Linda Seidel, whose subject will be “Bodies in Nature: Shadows and Reflections in 15th Century Painting.” For more information on the cafés or on the 2016 Art Meets Science exhibit, please visit https://mdibl.org/events/.