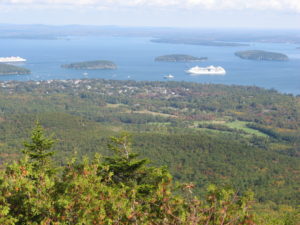 The park suffers from high levels of ozone and particulates, which affect visibility, public health, and vegetation; elevated levels of nitrogen and sulfur, which contribute to the acidification of park ecosystems; and high concentrations of mercury, a toxic metal that affects the health of reptiles, amphibians, fish and birds.

Bill Gawley, the program manager of Acadia National Park’s Air and Water Resources Program, will discuss air quality at the park at a MDI Science Café to be held on Wednesday, May 4 at McKay’s Public House, 231 Main St., Bar Harbor, at 5:30 p.m. The talk, entitled “What’s in the Air?: Air Quality Monitoring at Acadia National Park,” will address the park’s air pollution monitoring program and the effects of pollutants on park resources.

“In observance of Acadia’s centennial, many of our 2016 MDI Science Cafés feature topics that are relevant to the park,” said Kevin Strange, Ph.D., president of the MDI Biological Laboratory. “The subject matter of this café is particularly important because of the potential harm posed by air pollution to scenic vistas, public health and fragile ecosystems. We hope this café will stimulate interest in strategies to reduce air pollution and restore the health of park resources.”

In recent years, stricter federal regulations have contributed to reductions in levels of some air pollutants, but the park still suffers because of its location downwind from large urban and industrial areas to the south, as well as from coal-burning power plants in the Midwest. Also, the park’s steep slopes and high peaks – as well as its exposure to coastal fog – create an environment conducive to trapping polluted air masses.

One way in which air pollution affects the park is in terms of visibility, which can be obscured by haze caused by fine particles in the air. Although visibility has improved slightly, the park’s monitoring program has demonstrated that it is still less than half of what it should be, with the average natural visual range reduced from about 100 miles without the effects of pollution to about 50 miles, or to below 20 miles on high pollution days, according to park authorities.

Air pollution can also be a respiratory irritant. Fine particles in the air can get deep into the lungs, contributing to a wide range of health problems, from coughing to aggravated asthma to heart attacks and chronic bronchitis. Respiratory problems can also be induced by high levels of ground-level ozone. The concentrations of fine particles and ground-level ozone in the park occasionally exceed national public health standards.

The effects of atmospheric deposition are another concern. Nitrogen and sulfur in the air lead to acid rain and fog, which is damaging to lake and stream ecosystems. Mercury accumulates in the tissues of organisms, causing reproductive failure, impaired growth and development and decreased survival. The concentrations of mercury in some types of fish from the park exceed state freshwater fish consumption thresholds for humans and wildlife.

The café will explore current conditions and long-term trends for pollutants such as particulates, ozone, acid precipitation and mercury deposition.

The next MDI Science Café, the first in the summer series, will be held on Monday, June 27, at 5 p.m., at the Kinne Library at the MDI Biological Laboratory. MDI Science Cafés, which are sponsored by Bar Harbor Bank & Trust, Cross Insurance and McKay’s Public House, are open to the public and free of charge. Refreshments will be available. For more information, visit mdibl.org/events/science-cafes or call 207-288-3147.