Nonhealing Wounds: An Under-Recognized and Growing Threat to Public Health

When people think of health conditions that impose a big economic burden, they generally think of conditions like stroke or heart failure. But many may not realize that one of the most costly health conditions — on a par with stroke — is chronic nonhealing wounds.

According to the journal Wounds, chronic nonhealing wounds cost the the nation a staggering $50 billion per year, 10 times more than the annual budget of the World Health Organization. What’s more, the number of affected Americans is increasing dramatically due to increases in diabetes, obesity and an aging population.

Chronic nonhealing wounds have been called a silent epidemic that affects an estimated 2 percent (6.5 million) of Americans. This condition can result in amputation, disability, hospitalization, diminished quality of life, loss of productivity and even death, especially among those aged 60 and over. The actor Christopher Reeve of “Superman” fame, who became a quadriplegic after a riding accident, died of complications from an infected pressure ulcer.

As a result, little is known about patient outcomes or about the comparative effectiveness of treatments. To the extent that studies have been conducted, they have consisted almost entirely of industry-funded studies of the comparative effectiveness of dressings and other treatments. Moreover, they have generally excluded the most difficult patients: those with the hardest-to-heal wounds and those with other serious diseases.

The enormous social and economic impact of chronic nonhealing wounds has led to a call for the dedication of more attention and resources to the study of the basic biology underlying wound healing.

My research in the fruit fly at the MDI Biological Laboratory’s Kathryn W. Davis Center for Regenerative Biology and Medicine has yielded new discoveries about the molecular mechanisms underlying wound healing that could some day lead to new treatments for this costly and debilitating condition. Specifically, my laboratory has discovered an entirely new mechanism for wound healing called wound-induced polyploidy, or WIP.

When organisms are injured, they typically respond by growing new cells though cell division.

With WIP, by contrast, the cells become larger. In other words, the body restores tissue mass and tissue integrity by enlarging existing cells, rather than by creating more of them. The discovery of WIP opens the door to identifying genes or pharmacological agents that can promote wound healing by boosting the body’s ability to generate these extra-large cells.

Recent advances have led to improvements in our ability to manage nonhealing wounds, but the real breakthroughs will only come through an increased understanding of the underlying biology. Though more work needs to be done before my research can be translated into new therapies, the discovery of a new mechanism for wound healing — and its implications for human health — are a testament to the value of basic biological research. 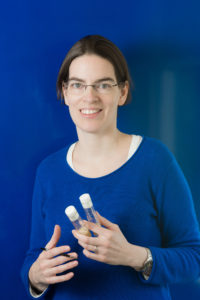 Vicki P. Losick, Ph.D., is an assistant professor at the MDI Biological Laboratory. She studies wound healing in the fruit fly, Drosophila melanogaster.

MDI Biological Laboratory scientist, James Godwin, Ph.D., who studies heart and limb regeneration in the axolotl, a highly regenerative Mexican salamander, likes to compare the process of regeneration that takes place at the site of an injury to a party. Over the course of his career, he has identified who comes to the regeneration party...