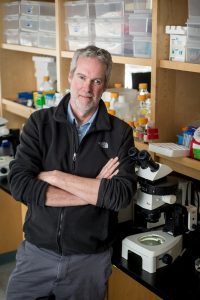 We all know our kidneys are charged with filtering our blood – an astonishing 52 gallons of it a day. But how does that actually happen? It turns out that it’s not unlike what one might imagine.

Each of the body’s approximately one million nephrons, the functional units of the kidney, contains a glomerulus, or a cluster of blood vessels where filtration takes place. The membranes of the glomeruli are lined with specialized cells called podocytes, which have tiny, foot-like projections (podo means “having a foot” in Latin) that protrude into the glomerular space. These “foot processes” are connected by a fine web called a “slit diaphragm” that functions like the mesh strainer that separates tea leaves from the tea in a teacup. Just as a strainer that isn’t fine enough allows leaves to escape into the tea, damage to the filtration barrier allows toxic proteins to escape into the blood.

But what if the damaged filtration barrier could be replaced? That’s the promise of research conducted by Iain Drummond, Ph.D., director of the Kathryn W. Davis Center for Regenerative Biology and Aging, who has identified the molecular signaling mechanisms underlying the formation, or morphogenesis, of podocytes.

Drummond’s discovery has potential applications in the treatment of a range of kidney conditions that can damage the glomerular filtration barrier, including acute kidney injury, developmental defects, premature birth defects, kidney cancer, polycystic kidney disease and chronic kidney disease (CDK) caused by diabetes or hypertension. In recent years, CDK has emerged as a major public health threat, especially among those age 60 and over, due to diabetes, hypertension and cardiovascular disease, all of which are risk factors and all of which are increasing as the population ages. Approximately 38 million Americans, or about 15 percent of adults, are estimated to have kidney disease.

The typical treatment for end-stage renal disease is dialysis, an expensive, time-consuming procedure in which the blood is filtered by an external device. Though another option is transplantation, only a fraction of patients with end-stage renal disease receive a transplant because of a shortage of donor organs. Because of the limited treatment options, kidney research at the MDI Biological Laboratory has focused on the development of replacement kidney tissue. But the development of such tissue depends on the ability to generate the hundreds of thousands of nephrons needed to filter the blood, and the podocytes that are a critical part of the glomerular filtration barrier.

With his recent research identifying the molecular signaling mechanisms underlying podocyte morphogenesis, Drummond and his colleagues have brought the 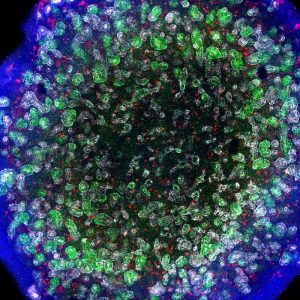 goal of creating replacement kidney tissue a step closer to reality. In studies in the embryos of zebrafish, a common aquarium fish, and in maturing human kidney organoids, which are stem cell-derived “mini-organs” or “organs in a dish,” he found that formation of the filtration barrier in the glomeruli during development depends on calcium signaling. The discovery could speed the development of organoids into complex, organ-like structures that can be engrafted into patients suffering from a loss of kidney function.

Though Drummond’s ultimate goal is the development of replacement kidney tissue, an increased understanding of podocyte morphogenesis could also offer insight into nephron regeneration. Unlike humans, zebrafish can regenerate nephrons throughout their adult lives. Though it is unknown if zebrafish generate the same molecular signals during regeneration as during development, Drummond thinks this is likely, in which case a deeper understanding of these signaling mechanisms could identify latent processes for repair and regeneration in humans that could be targeted for pharmaceutical therapies to restore diseased or injured tissue.

The overriding question engendered by any discussion of creating an artificial biological kidney is always How long? Drummond believes the tools of modern science have brought science to the point that within five years, it will have achieved proof of principle, and within ten it will have created functional replacement kidney tissue.