HomeNewsBreaking ThroughMaking a Mouse More Like an Axolotl: How James Godwin’s Discoveries Are Helping Science ‘Pull the Levers of Regeneration’
July 15, 2021

When it comes to salamanders, observers of the natural world since the time of the ancient Greeks have wondered, Why can they regenerate their limbs and tails while humans cannot?

Science is now inching closer to the answer thanks to new research by MDI Biological Laboratory scientist James Godwin, Ph.D. Following in the laboratory’s tradition of using comparative biology to gain insights into human health, Godwin has compared the molecular mechanisms governing regeneration in a highly regenerative salamander to those in the mouse, which has limited regenerative capability. 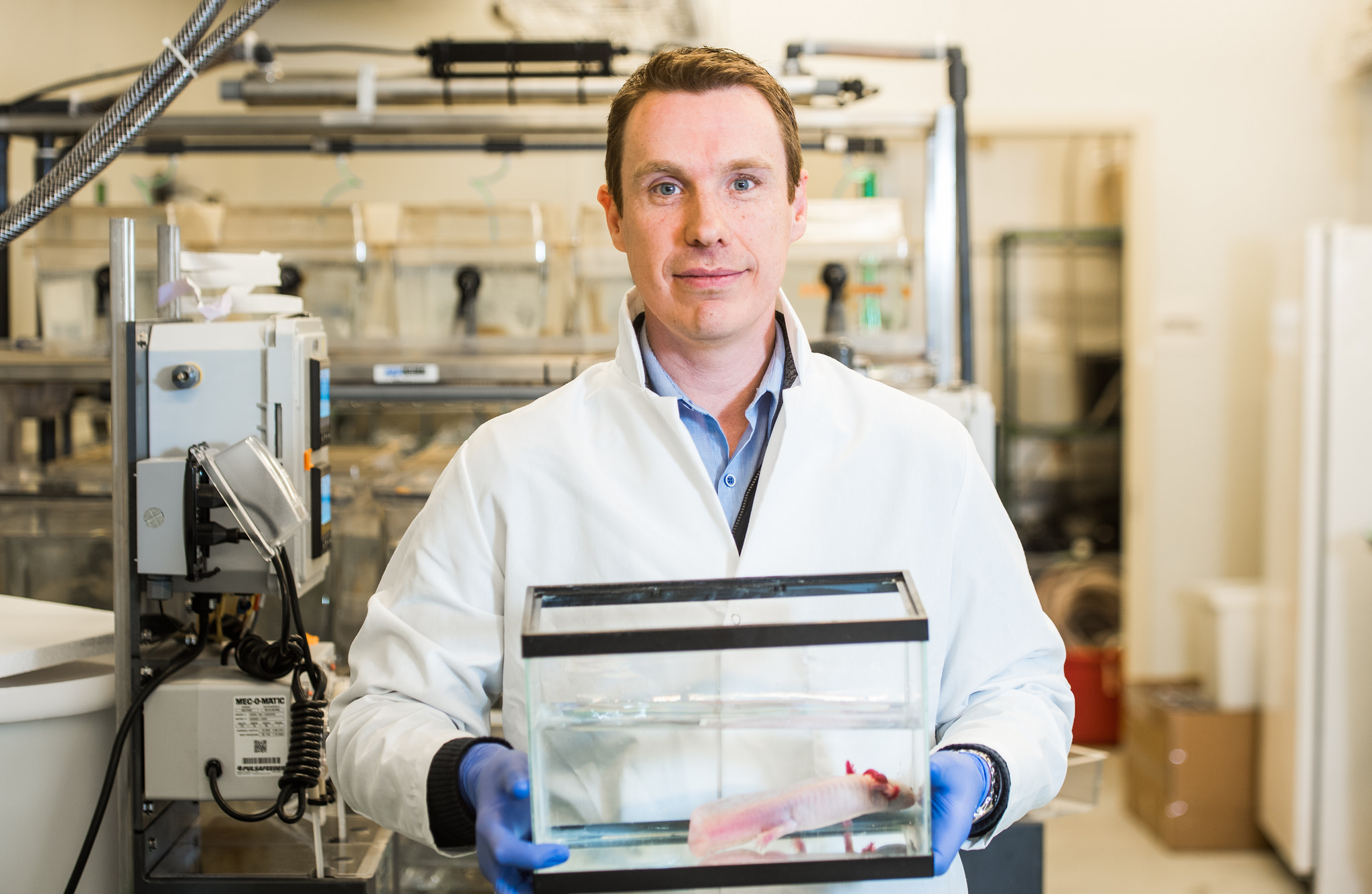 Dr. James Godwin with an axolotl; the aquatic salamander with an amazing capacity for regeneration.

The answer centers on a process called fibrosis, or scarring. Instead of regenerating, the mouse and other mammals form a scar at the site of an injury, which acts as a physical barrier to regeneration. Once a scar has formed, it’s “game over” in terms of regeneration, which means that the ability to trigger regeneration in humans depends on getting around the scarring hurdle, Godwin says.

The paper on the results of Godwin’s recent research, which was conducted by a team that also included scientists from The Jackson Laboratory in Bar Harbor, Maine, the Australian Regenerative Medicine Institute (ARMI) in Clayton, Australia, and the Research Institute of Molecular Pathology in Vienna, Austria, was recently published in the journal Developmental Dynamics.

Specifically, the paper reported that the signaling response of a class of proteins called toll-like receptors that allow macrophages to recognize a threat such an infection or injury and induce a pro-inflammatory response, were “unexpectedly divergent” in response to injury in the axolotl and the mouse. The finding raises the prospect that drugs exploiting this response can be developed to trigger regeneration in humans.

If regeneration in humans sounds like science fiction, it shouldn’t. Humans can already regenerate – for instance, newborns can regenerate heart tissue and children can regenerate fingertips. It’s likely that the circuitry is already there, we just grow out of it. Godwin hypothesizes that this is because the adaptive immune system of adults (the “learned” immune system that develops in response to exposure to viruses and other pathogens) isn’t compatible with regeneration. The Xenopus, a frog species that is also studied at the laboratory, for example, can regenerate as a tadpole, but loses this ability when it develops an adaptive immune system after its metamorphosis into an adult.

Godwin’s goal is to reactivate this dormant circuity in adult humans. Though regrowing a body part as complex as a human limb may not be realistic in the short term, he believes significant opportunities exist for therapies to improve clinical outcomes in diseases in which scarring plays a major role in the pathology, including heart, kidney, liver and lung disease. The inability of the body to repair adult heart muscle after injuries including a heart attack, for example, leads to heart failure – a deadly and costly disease that affects more than six million Americans.

In his earlier research, Godwin made the axolotl more like a mouse by depleting its macrophages, which induced it to form a scar rather than regenerate. In his current research, he is seeking to make a mammal, the mouse, more like an axolotl. As a result, science is getting closer to being able to “pull the levers of regeneration,” as Godwin puts it, in mammals with limited regenerative capabilities, including humans.

The consequences could transform the practice of medicine.