During College years, having a dedicated and caring mentor can make a huge difference in a student’s success and passion for learning their chosen subject. If well matched, there can be true symbiosis, where both parties gain positive outcomes. For former INBRE* student Lydia Tilley and INBRE Investigator Larry Feinstein, Ph.D., this seems to have been the case.

Tilley graduated from the University of Maine at Presque Isle (UMPI) with a Bio Pre-Med major and a minor in Chemistry. With her tenacity, drive, and an eye firmly on her future, Tilley is a wonderful example of a student who has taken full advantage of what the INBRE program offers. 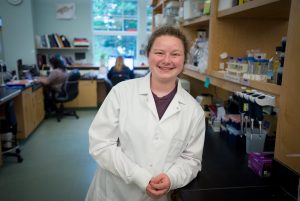 As a freshman in 2016 on a Pre-Med track, Tilley knew that undergraduate research was something she needed to focus on, and she found that INBRE’s programming fitted her needs. During her time as an INBRE student she completed two winter short courses and a summer residential fellowship, all at the MDI Biological Laboratory, lead institution of the Maine INBRE program. “INBRE has been hugely impactful and beneficial to me – it’s given me the opportunity to participate in real-world lab research experiences that I wouldn’t have had at UMPI alone,” Tilley says. “It’s affordable too; college is already so expensive but INBRE makes these experiences accessible no matter your means.”

Throughout her undergraduate degree, Tilley worked with Larry Feinstein, Ph.D., who was named an INBRE Investigator in 2019. Having Feinstein as a mentor was a fantastic experience according to Tilley. “He’s super invested in his students, in a really individualized way. Dr. Feinstein helped me to find great funding opportunities and more. I can say nothing but good things – and I’m even still working on finalizing a paper with him.” says Tilley. One of the funding opportunities that Tilley is referring to is a fellowship she was awarded by the American Society of Microbiology (ASM). Given to only 20 students across the U.S., it gave Tilley the opportunity to present her summer research findings at the ASM conference in Atlanta.

Feinstein and his students’ work focuses on antibiotic resistance (ABR). By sequencing the genomes of bacterial pathogens, Feinstein is working to determine the mechanisms responsible for transferring ABR genes between similar and different bacterial species. Originally working with clinical isolates from the local hospital, the Feinstein Lab now works with isolates from hospitals throughout the state. By understanding the distribution of genes in different pathogens and the 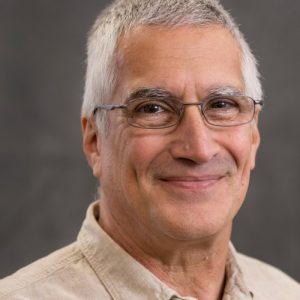 mechanisms by which genes are shared, Feinstein hopes for the development of new drug therapies for treating ABR bacterial infections. His research also focuses on genomic changes in bacterial strains over time, as well geographic differences – some genes have world-wide distribution, but others are distinct but disparate (such as one that is common in China but has only been found in one location in the U.S. to date).

Feinstein says that while being a mentor is an important role, he notes that he benefits too. “Students are incredibly helpful in moving my research forward,” he says. “I’ve had four students involved in INBRE over the last year and the additional lab experience gives them a chance to stretch themselves a bit, and I get a higher skillset in my lab. It’s a wonderful partnership.”

Feinstein explains he offers every opportunity he can to involve students in lab research. Immersive lab work is often reserved for graduate students at larger institutions, but at a smaller institution like UMPI, undergraduates get to experience specialized, real-world work which may give them a competitive edge in applying to grad school or in the job market.

Like most, Feinstein admits that COVID-19 has impacted his research and how he works with his students and he’s waiting to see what the Fall Semester might bring. But judging by Tilley, who accepted a full-time position as a Research Assistant in the Murawala Lab at MDI Biological Laboratory in June of this year, his mentorship combined with student drive creates some fabulous results.

*(This post has been adapted from a story that originally appeared in the Maine INBRE Summer Newsletter.) The Maine IDeA Network of Biomedical Research Excellence (INBRE) is a collaborative network of Maine educational and research institutions led by the MDI Biological Laboratory and sponsored by the National Institute of General Medical Sciences (NIGMS) of the National Institutes of Health (NIH).