Getting Middle Schoolers Excited About Science

I recently had the opportunity to visit the James F. Doughty School, a middle school in Bangor, for Maine BioScience Day on behalf of the MDI Biological Laboratory. I had the pleasure of teaching the students there about what I do at the laboratory, and about science in general.

Maine BioScience Day, which took place Nov. 8, was organized by the Bioscience Association of Maine to inspire young people to pursue careers in one of Maine’s numerous science-based companies and research institutions. I was one of many scientists, researchers and employees to visit middle schools across Maine to talk about their jobs, discuss what their organizations do and raise awareness of the career opportunities this sector offers to Maine students.

The first two classes I talked with were seventh graders. I showed them some of the animals used as models to study regeneration and aging at the lab (zebrafish, axolotl and purple sea urchins) and explained to them how they are used in our research. The kids loved seeing these animals up close. Those who wanted to had the opportunity to hold the urchins, and were thrilled that they could feel their spines moving around in their hands. A lot of the kids had never seen an axolotl, or Mexican salamander, before, so there were mixed reactions: some thought the axolotls were adorable, and others thought they were scary. After I taught the kids about how the axolotls develop and regenerate, however, they all thought that they were pretty amazing creatures. 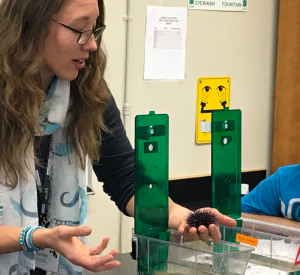 The last class I taught was an after-school group of eighth graders who are working on projects for the Middle School State Science and Engineering Fair. The topics of conversation ranged from phytoplankton and whales to the MDI Biological Laboratory and my own experiences as a marine biologist to their science fair projects and their questions about the scientific method. I gave each of these students a “MDI Biological Laboratory Lab Notebook” and explained how important it is to keep a lab notebook when they are doing experiments. The kids were so full of enthusiasm that a few even helped me carry my cooler and gear out, asking questions the whole way.

My participation in Maine BioScience Day was an incredible experience for me. Meeting so many young people who at first seemed unimpressed by anything but who warmed up after talking for a bit and got really excited about science was overwhelmingly heartwarming. These kids reminded me of myself at that age – just starting out, excited and uncertain, yet filled with questions and possibilities. It meant the world to me to think that I might have inspired some of them to get more involved in science. The teachers have since informed me that the experience left a mark on their students, three of whom have decided to do their science fair projects on marine-related topics.

My favorite part of the day happened as I was leaving. One student walked up to me with her friend and asked a question, which I answered. She thanked me enthusiastically, and as she and her friend were walking away, I overheard her exclaim, “That was SO cool!” Getting middle schoolers excited about science … ? Now THAT is cool!

Karlee Markovich has been an animal core technician at the MDI Biological Laboratory for over a year. Previously, she worked at Mystic Aquarium in Connecticut for three years while pursuing a bachelor of science degree in marine biology from the University of Rhode Island. After college, she taught children in pre-kindergarten through grade 12 about marine invertebrates for a private aquarium in Rhode Island. Prior to joining the MDI Biological Laboratory, Markovich worked as a naturalist on whale watch boats in Bar Harbor and Alaska, a position in which she taught people of all ages about the ocean and its animals.