The following is an excerpt from a Q&A with Regenerative Medicine Network, an online network for the regenerative medicine community based in the United Kingdom. Read the full interview.

Extensive regeneration occurs in certain animals such as amphibians and teleosts, allowing them to fully regenerate body parts such as  limbs, tails, and retinas. Despite the fact that humans share many genes with these organisms, our adult regenerative capacity is limited.

Drs Benjamin L King and Voot P Yin at the MDI Biological Laboratory in Bar Harbor carried out a next-generation sequencing analysis into the genetics of these organisms to identify the genetics regulating blastema formation – the key step in regeneration in animals such as the zebrafish, axolotl and the bichir, where the injury site forms a mass of dedifferentiated cells that proliferate and differentiate in a coordinated manner to re-form the lost appendage.

In this interview, they discuss their discovery of a common miRNA-regulated genetic network of genes controlling limb regeneration in regenerative species.

Voot Yin: These three animal systems last shared a common ancestor in the evolutionary tree about 420 million years ago. Each appendage has different tissue composition and rates of regeneration, yet when you look at the critical structure, the blastema, there’s actually a well-conserved set of miRNAs. To me it’s surprising but also revealing, as it tells us that if we want to manipulate or enhance blastema formation in a non-regenerative system we now have the key ingredients that have been favored during evolution as being critically important.

Benjamin King: With high-throughput sequencing we could really understand for the first time what miRNAs and genes are expressed in all three systems. The zebrafish, of course, is a widely utilized model organism with a well-characterized genome, but with the axolotl there are fewer genetic tools. Another challenge was working with Polypterus senegalus (bichir) as there was no previous knowledge to rely on, so we had to assemble what we call a transcriptome and identify miRNAs in both the bichir and the axolotl.

In particular, seeing that miR-21 was consistently upregulated and was the most highly expressed miRNA in all three systems was one of the biggest surprises. It demonstrates just how powerful genomics is as a tool for characterizing organisms with traits of interest.

As the genes identified in your research are present in humans, what are the steps to finding out if this regenerative mechanism can be activated in humans?

BK: As you stated, all of these genes are present in the human genome, but they are regulated differently, so finding mechanisms or therapies that can reactivate them is critical.

VY: A lot of biology is dictated by the timing and location of the activation of genes. For example, we have an idea of the changes in overall levels of certain miRNAs and for some of them we know when and where they are turned on — at least in highly regenerative systems — but we don’t yet know what the situation is in non-regenerative systems like humans.

We know that regeneration is an orchestra of communication signals from a number of different tissues, and those tissues have to turn on genetic light switches at the same time, so part of the challenge in defining those circuits in greater detail is going to be interrogating these miRNAs and their potential target genes in a mammalian system.

Do you have any other comments you’d like to add?

BK: The paradigm of data-driven discovery is something I think will grow and will continue to have a leading role here at MDI Biological Laboratory. Essentially all labs in the world are applying some aspects of genomics to their analyses, and having more people trained in using these tools is important.

VY: I’d like to go back to the idea that evolution has created a beautiful canvas for understanding regeneration with all these different organisms that already exist in nature, and that we can learn quite a bit by querying not only individual systems but multiple systems that share this unique quality. By doing this we are refining the important genetic factors that allow these processes to happen. This is something that we in the developmental and scientific community refer to as comparative biology – comparing different systems to understand an aspect of biology.

This is something we do very well at this institute — it’s our backbone and foundation. We are building upon that foundation and bringing in state-of-the-art technology in bioinformatics. It is this combination that is enabling these major advances in regenerative biology and medicine and that I think will be a common theme moving forward. 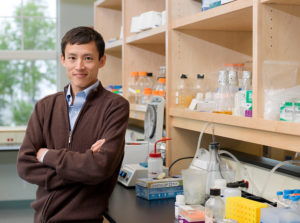 Voot P. Yin,. Ph.D., is an assistant professor at the MDI Biological Laboratory.