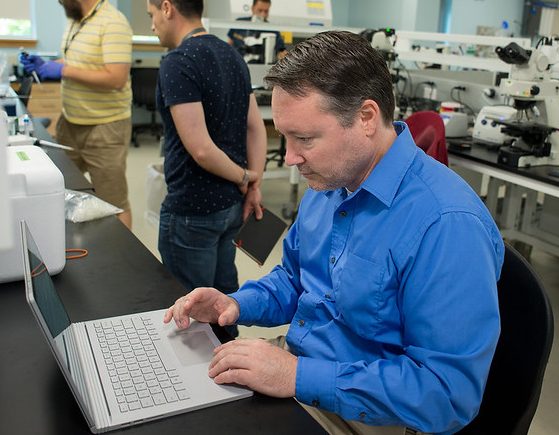 We’ve long had evidence of the longevity benefits of exercise, but exactly how that happens has always been something of a mystery. It could be that muscular activity activates the cell’s longevity-promoting program.

Consider the following scenarios: In the first, a thin young woman who exercises excessively develops athletic amenorrhea, or stops menstruating, rendering her incapable of bearing children. In the second, a sedentary, overweight girl undergoes menarche at a precociously early age.

Aric N. Rogers, Ph.D., who studies aging at the MDI Biological Laboratory, believes these scenarios share a common theme: signals from muscle hormones to the cell that are triggered by muscle activity or, in the second scenario, the lack thereof.

According to Rogers’ fascinating hypothesis, these signals inform the cell about levels of foraging activity, which are in turn an indicator of nutrient availability. As with other animals, humans respond to the presence or absence of nutrients with powerful signals that govern the body’s response on a cellular level.

In the first scenario, the high level of muscle activity sends a message that foraging activity is high, signaling that conditions aren’t optimal for reproduction since the parents and/or offspring are unlikely to survive in a nutrient-scarce environment. In the second, the low level of muscle activity sends the message that foraging activity is low, signaling that conditions are optimal for reproduction due to a plentitude of nutrients.

Rogers’ interpretation of these scenarios is based on his recent research in the tiny nematode worm, C. elegans, which is a popular model in aging research because it shares many of its genes with humans and because of its short lifespan, which allows investigators to quickly assess the effects of anti-aging interventions.

His research focused on mTOR (mechanistic target of rapamycin), a master regulator of cell growth that governs the cellular response to the availability of nutrients in the environment. When nutrients are plentiful, mTOR signals the cell to ratchet up protein translation, or production, which is essential to growth and reproduction, and when nutrients are scarce it signals the cell to activate a longevity-promoting survival program in which protein translation, which is a heavy consumer of cellular energy and resources, is turned down. By conserving resources, this program allows the organism to survive until food is plentiful enough to support reproduction.

In his recent research, Rogers sought to study the effects of genetically suppressing protein translation in various tissues. While skin, nerve and reproductive tissues responded as expected to the suppression of protein translation – by shifting the cellular machinery from the growth and reproduction program to the longevity-promoting survival program – muscle tissue responded in the opposite way, with increased, instead of decreased, growth and reproductive capacity.

While initially baffled by the results, Rogers now hypothesizes that muscle is “privileged” under conditions of nutrient scarcity because of its role in helping an organism forage for food. While other tissues switch to the longevity-promoting survival mode when food is scarce in order to conserve resources, muscle still has to be able to grow in order to allow an organism to look for food. If a body’s resources are viewed like household resources, muscle tissue is like the wage earner who consumes a disproportionate share of food during a time of scarcity in order to maintain strength to go to work.

Rogers’ findings could potentially contribute to the development of anti-aging drugs that prolong healthy lifespan while avoiding the negative side effects associated with a reduction in protein synthesis, including sarcopenia, a potentially debilitating age-related loss of skeletal muscle.

While he points out that parallels between worms and humans aren’t always valid, Rogers believes his findings may also explain why moderate exercise helps extend healthy lifespan. Though scientists have long known that exercise is an effective anti-aging intervention, they haven’t known why. By exercising, an individual may be sending a message to the cell that foraging activity is high – in other words, that food is scarce – which induces it to activate the longevity-enhancing survival program in order to conserve resources. By contrast, sedentary behavior, especially in a context of plenty, may signal that foraging activity is low – or that nutrients are abundant – and that conditions are therefore optimal for activating the growth and reproduction program.

While the growth and reproduction program is beneficial for those who are still growing and reproducing, when left in the “on” position in later life as a result of inactivity when it is no longer relevant, Rogers believes it contributes to the chronic, degenerative diseases of old age, including cancer, inflammation, obesity and the “hyper” pathologies such as hyperglycemia, hyperlipidemia and hypertension. By contrast, a high level of activity can set the cell’s longevity-promoting survival program into action.

“We’ve long had evidence of the longevity benefits of exercise, but exactly how that happens has always been something of a mystery,” Rogers said. “It could be that muscular activity activates the cell’s longevity-promoting program.”