Looking Beyond Stem Cells and Tissue Engineering: What if Lost and Damaged Tissues and Organs Could Be Regenerated Simply by Taking a Drug?

The following is an excerpt of an editorial by Kevin Strange, Ph.D., president of the MDI Biological Laboratory and CEO of Novo Biosciences, that was originally published in the online journal Regenerative Medicine Network. Read the full editorial.

The U.S. Department of Health and Human Services has called regenerative medicine the “vanguard of 21st century healthcare”1. Regenerative medicine R&D efforts are focused largely on developing stem cell and tissue engineering therapies as a means to regenerate, replace or repair damaged tissues and organs. Despite over 15 years of extensive research, these approaches remain challenged by problems with efficacy, by their complexity and expense, and by regulatory hurdles7,10,11,17. In addition, the hyperbole that has been generated around stem cells has contributed significantly to scientific fraud and the growth of unregulated stem cell clinics and spas offering unproven and costly treatments12,16.

Is there another approach? What if we could take a drug that would stimulate the regeneration of lost and damaged tissues and organs? Regenerative medicine small molecule therapies offer many advantages over other therapeutic approaches including reduced complexity, ease of administration, ready reversibility, fewer regulatory hurdles and the absence of ethical concerns like those that have challenged the stem cell field. Small molecules would also likely be less costly to administer and thus be available to a larger patient population.

“What if we could take a drug that would stimulate the regeneration of lost and damaged tissues and organs?”

Small molecule drugs are discovered utilizing target- or phenotype-based approaches. Target-based strategies typically employ in vitro high-throughput screening methods to identify small molecules that alter the activity of an identified candidate protein implicated in a disease process. Phenotypic approaches screen for the effects of small molecules on an observable characteristic of an animal, tissue or cell model, typically without a priori knowledge of the target.

The third challenge is one that is pervasive in biomedical R&D. Non-mammalian animals like zebrafish, fruit flies, nematode worms and even seemingly more exotic creatures like salamanders and Mexican blind cavefish provide powerful experimental models for understanding fundamental biology and disease mechanisms. Unfortunately, this is not widely appreciated and mammalian models such as mice are generally thought to be the best systems for informing our understanding human physiology and pathophysiology.

Arguably, the most economical and efficient strategy for development of small molecules with regenerative medicine applications is to use non-mammalian animal models for both target- and phenotype-based drug discovery. Countless invertebrate and lower vertebrate animals, including fruit flies, salamanders and zebrafish, exhibit remarkable regenerative capabilities2,14. The zebrafish in particular is able to fully regenerate many lost or damaged body parts5,6. In contrast, humans and most other mammals have limited capacity for regenerating damaged tissues even though they possess the genetic instructions needed for building tissues and organs de novo during embryogenesis.

“In only a short period of time and with modest resources, the MDI Biological Laboratory’s approach has generated promising results.” 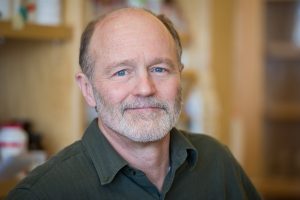 Kevin Strange, Ph.D., is the president of the MDI Biological Laboratory and the CEO of Novo Biosciences.

Scientists at the MDI Biological Laboratory use the comparative model approach to understand the basic biology of tissue regeneration and aging. Thanks to evolution and common ancestry, we humans actually share a large portion of our DNA with fish, worms, and salamanders. Humans and zebrafish, for example, share 70% of the same genes; 84% of human genes known to be associated with human disease have a zebrafish equivalent. That’s a lot of similarity.