BAR HARBOR — At the urging of the fire chief, the town is set to contribute $10,000 toward the repair of the dam at Hamilton Pond. The town council unanimously approved the funding at their Aug. 7 meeting.

The dam, which sits where the pond meets Stony Brook in the southwest corner of the pond, is on a parcel of land owned by the MDI Biological Laboratory (MDIBL). The town of Bar Harbor has helped finance repairs of the dam in the past, according to materials submitted to the council from MDIBL, since it is the primary fire reservoir for the area. 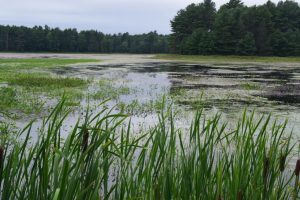 The water level in Hamilton Pond has dropped at least two feet since a dam at the outlet collapsed in February. Work to repair the dam has begun and is expected to be finished by the end of September. The Bar Harbor Fire Department depends on the pond as a source of water for the Salisbury Cove area. ISLANDER PHOTO BY BECKY PRITCHARD

In rural areas not served by the town water system, a so-called dry hydrant is used for fire trucks to draw water from ponds for firefighting. 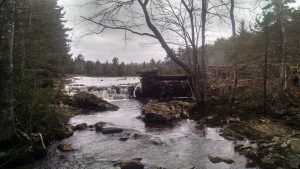 The dam between Stony Brook and Hamilton Pond collapsed in February. MDI Biological Lab owns the property around the dam and has begun work on repairs.

In a July 30 memo, Fire Chief Matthew Bartlett called the pond “a critical water source for firefighting” in the Salsbury Cove area. “The immediate area covered by Hamilton Pond is 1,294 acres, 260 parcels of land, and 443 structures,” he says, which is larger than any other area in the town dependent on a rural source of water.

The dam partially collapsed during a storm in February, after which the water level in the shallow pond dropped two to three feet. This has made the pond unusable as a water source by the fire department.

MDIBL plans to repair the dam beginning in mid-August. The cost estimate is $68,375, including $43,375 for repair, and $25,000 for ongoing maintenance to reduce the likelihood of future costly repairs.

The organization has secured some additional money in private donations, and is still raising funds to cover the full cost of repairs.

“We are moving ahead with the repair,” MDIBL spokesperson Stefanie Matteson said in an email. “The preparation for the repair has begun, with tree clearing and road upgrades. We expect the repair to be completed by the end of September.”

This is also good news for area residents who also use the pond recreationally for fishing and skating. If all goes as scheduled, the pond will be ready for skating by winter.