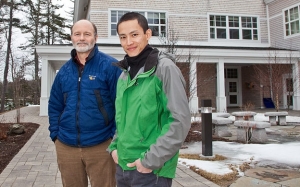 It is the apples in his uncle’s refrigerator that Voot Yin recalls most about his long, harrowing escape from Cambodia’s Khmer Rouge genocide in the 1970s. First he, his three siblings and their mother escaped to a Thai refugee camp, then traveled on to the Philippines, California, New York, eventually reaching their final destination in Hartford, Conn., where they arrived late at night, all their belongings stuffed into a single carry-on suitcase. What he remembers to this day are those Red Delicious apples and sneaking downstairs in the middle of the night to take them back to the room where the entire family was sleeping.

“I hid them under my pillow. I was so afraid they wouldn’t be there when I woke up,” he says. “I never take anything for granted.”

He started school without being able to speak English, and spent years being told what he wouldn’t be able to do.

“I was not big enough, I was not smart enough, I didn’t speak English,” he says. “An early lesson I learned is that with a lot of work, there’s nothing you can’t achieve.”

Now Yin is an assistant professor of regenerative biology at the Mount Desert Island Biological Laboratory and recently achieved the American dream, co-founding a startup company earlier this year with lab Director Kevin Strange. Novo Biosciences Inc. is the first spinoff in MDIBL’s 115-year history. It will focus on developing a therapeutic compound to help speed tissue healing and stimulate the regeneration of lost and damaged body parts in zebrafish, with the aim of eventually translating it for use in humans.

“He’s the first faculty member I recruited,” says Strange. “I thought it would be hard to get first-rate people to Maine.”

Yin had two other job offers at the time, including at the Massachusetts General Hospital Center for Regenerative Medicine. Strange wanted Yin because he is an entrepreneur, a risk-taker and is willing to think outside the box and try something different to build a science career and an institution.

Yin describes himself as incredibly ambitious, and says he’s not afraid to fail. “I want to be 10 steps ahead of where I’m really at,” he says.

Like Strange, he was attracted to MDIBL to participate in the growth of a regenerative center and build it from the ground up.