At first glance, Caenorhabditis elegans may not appear to have much in common with people. The microscopic nematode grows to just about 1 millimeter in length and thrives in soil environments – especially rotting vegetation. But behind the genetic scenes, this tiny worm may help scientists combat one of humanity’s greatest challenges: aging.

A team of researchers from MDI Biological Laboratory, Buck Institute for Research on Aging California, and China’s Nanjing University studying C. elegans has identified two cellular pathways found in the worm that govern aging. When altered, IIS and TOR can expand the lifespan of the animal by 500 percent – the equivalent of a person living for up to 500 years. Oddly enough, both IIS and TOR are also present in people. 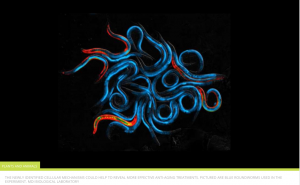 IFLScience spoke with study authors Jarod Rollins and Aric Rogers, who responded jointly to interview questions. They explain that IIS reacts to environmental factors, like food, to coordinate an organism’s cellular response among different tissues. It is responsible for signaling insulin that, when targeted by CRISPR and subsequently mutated, increases the lifespan of C. elegans by 100 percent. On the other hand, TOR is a nutrient sensor that lives within cells that responds to changes in food availability even more ancient than hormone signaling, which the researchers note became necessary during the evolution of single-cell to multicellular species. When manipulated, TOR results in a 30 percent increase in longevity. 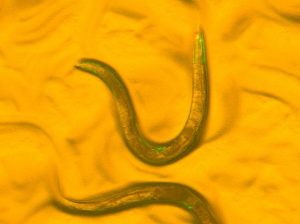 Roundworms share many genes with humans and also have a short lifespan of between three and four weeks, allowing scientists to study long-term effects in a truncated timespan. MDI Biological Laboratory

“Together, lowering activity of IIS and TOR are thought to influence aging by switching cells from a growth model to one that favors maintenance,” explained the researchers, adding that this “wild” effect isn’t a “one plus one equals two, its one plus one equals five” but results in the amplification of the worm’s month-long lifespan by 500 percent – an extension greater than the sum of the two separate mutations, a concept known as a “synergistic effect.”

“Many of the same genes and genetic pathways are shared between nematodes and humans. Tweaking activity of similar genes in humans with drugs or other therapeutics, while unlikely to cause a 500 percent lifespan extension, may produce a similar kind of synergistic reaction when both gene pathways are targeted simultaneously,” explained Rollins and Rogers.

It is believed that longevity is regulated in mitochondria, organelles responsible for cell energy, and builds on a body of evidence that suggests mitochondria dysregulation is linked to aging. The findings could help to explain why researchers have not identified a single longevity gene responsible for helping some people to live to extraordinarily old ages free of age-related diseases until just before death. It could also one day lead to combination therapies that work together to target individually different pathways to extend healthy human life.

The real question: Might humans one day expect to live for five centuries?

“It’s is certainly possible, there are lots of examples in nature of organisms that live a very long time. However, the real focus of the field is to enable humans to live as healthy as possible for as long as possible by preventing age-related decline in health,” said the researchers.

The team notes that the scientific community is on the precipice of exciting changes in medical approaches, but admit that seeing these changes put in place is a bit like “pulling teeth”. 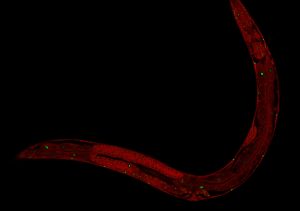 Creating transgenic, or genetically altered, animals is now much more rapid, routine, and precise with the use of CRISPR technology for studying the effects of aging. MDI Biological Laboratory

“People are suffering and medical costs are skyrocketing. It’s time for all of us to get serious about incorporating broad scope preventative medical approaches to lessen the prevalence and severity of age-related diseases,” they added.

The findings are published in Cell Reports.