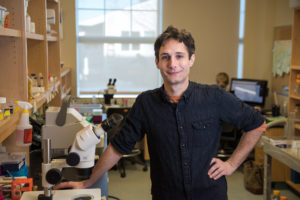 Jarod A. Rollins of the MDI Biological Laboratory in Bar Harbor, Maine, is a lead author of a recent scientific paper that identifies synergistic cellular pathways for longevity that amplify lifespan fivefold in C. elegans, a nematode worm used as a model in aging research. The increase in lifespan would be the equivalent of a human living for 400 or 500 years. The discovery of the synergistic effect opens the door to new, more effective anti-aging therapies.