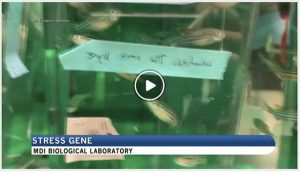 MOUNT DESERT ISLAND – Nature versus nurture. A tale as old as time.

At the MDI Biological Laboratory researchers focus on both.

One of their most recent topics is how the stress hormone, cortisol, affects our genetic make-up.

In a situation where we are under a lot of stress for a long period of time that can have an impact and make us more susceptible to diseases like diabetes, like asthma. Diseases associated with inflammation or an elevated immune response,” said Jen Bowers.

Associate professor at MDI Biological Laboratory Jim Coffman and his research team have identified one of the gene’s they believe is affected by stress.

The gene is called KLF9.

“By treating zebrafish with cortisol and we found you get dysregulated gene expression that’s associated with inflammation. And that told us we were on the right track,” said Coffman.

Coffman and his team are searching for interventions which could help prevent the gene from negatively altering your development.

Another important finding of KLF9 is when it has been influenced, then the gene could not only affect you, but could be passed to your children.

Coffman added “It is an important piece of the puzzle, which we think it is. Then how is it affected by stress. One of things that’s very interesting about early life stress is that it can have epigenetic effects that then have like a memory and its passed on. And even if you are not experiencing stress later in life you responding to stress differently and you can even pass it on to future generations.”

Coffman encourages everyone to make healthy life style choices even though that may be particularly during a global pandemic.