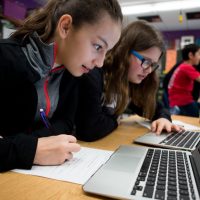 The mitigation of contaminants, especially arsenic, in well water is the subject of the laboratory’s federally funded SEPA (Science Education Partnership Award) program, which teaches data literacy to secondary school students by analyzing data from well water collected from their homes. The grant from the Maine CDC will fund the testing of 500 wells from student households in Maine in coordination with the SEPA program.

Previous testing conducted under the SEPA program has found that water from private wells in Maine is frequently contaminated with high levels of naturally occurring arsenic, which can have serious adverse health effects, including cancer, heart disease and developmental and reproductive problems. The program has also found that a large proportion of homeowners have not had their wells tested for arsenic.

Arsenic has been designated by the U.S. Environmental Protection Agency as the environmental contaminant with the biggest impact on human health.

The grant will also fund a pilot project to develop tools to evaluate the effectiveness of the program at reducing environmental health hazards with the goal of using it as a model for other school- and community-based programs in Maine and the country.

“We are very grateful to the Maine CDC,” said Jane E. Disney, Ph.D., director of research training and director of the Community Environmental Health Laboratory at the MDI Biological Laboratory and principal investigator of the SEPA program. “Their support will help us take the SEPA program to the next level by identifying barriers to mitigation for households whose wells test high for environmental contaminants.”

“The SEPA program is the most recent example of the MDI Biological Laboratory’s long and distinguished history of leadership in the field of environmental health,” said Hermann Haller, M.D., president. “The grant from the Maine CDC will allow us to build on this extraordinarily successful program, which, in addition to addressing the arsenic threat, is helping students gain valuable expertise in data literacy.”

Since the inception of the SEPA program in 2018, students from 17 Maine and 10 New Hampshire schools working one-on-one with 18 scientist partners from Maine and New Hampshire colleges and universities have analyzed more than 1,500 well water samples in collaboration with the Trace Element Analysis Core at Dartmouth College. Results are shared with the Maine CDC and the N.H. Department of Environmental Services to help them monitor public health implications.

Maine and New Hampshire have among the highest per capita reliance on private wells for drinking water in the nation at 56 percent and 46 percent respectively, representing a total of approximately 1.4 million people on private well water.

The public health threat posed by arsenic and other harmful well water contaminants has been a focus of education and research at the MDI Biological Laboratory since a 2014 “arsenic summit” held in collaboration with Dartmouth to address approaches to limiting arsenic exposure. The summit led to an educational program entitled “All About Arsenic,” which in turn gave rise to the SEPA program and now to the CDC grant.

“One of the goals of the summit was to develop novel programs to address the arsenic problem,” Disney said. “I am gratified to say we have realized this goal by developing a program that we hope will serve as a national model. This achievement represents the collaborative effort of many individuals and organizations with whom we have worked to improve access to safe drinking water.”