The discovery — that a combination of genetic alterations enables a species of nematode called C. elegans to live for months rather than weeks — could lead to ways to extend healthy human lifespans, according to the researchers at Mount Desert Island Biological Lab. If the scientific finding eventually leads to a proportional result when applied to people, they said, it would be “the equivalent of a human living for 400 or 500 years.”

Tiny worms known as nematodes are shown in this image of a microscope slide. In a discovery that could hold implications for human health, scientists at MDI Biological Laboratory in Bar Harbor have found a way to increase the lifespans of a certain species of nematode by 500 percent. (Courtesy of Mount Desert Island Biological Laboratory via BDN)

The findings recently were published by the online journal Cell Reports. The paper’s authors include MDI Bio Lab scientists Jarod Rollins, a Pittsfield native who attended the University of Maine, and Aric Rogers, as well as scientists from the Buck Institute for Research on Aging in Novato, California, and Nanjing University in China.

Rollins said Thursday that the C. elegans species of nematode is used in many scientific studies into the biology of aging because of their short life spans. It would take years to get results from similar studies with mice, he said, and decades to do it with humans.

Many of those studies involve nematodes genetically modified one way or another to see how certain mutations affect the aging process, he said, and when they succeed in extending the worms’ lifespans, it is often by roughly 30 to 40 percent.

An experiment from the 1980s that affected how the nematodes produce insulin extended lifespans on average by 100 percent, he said, while another mutation that affects a type of enzyme that helps to control cell growth and aging later was shown to extend nematode lifespans by an average of 30 percent.

Rollins, Rogers and their collaborators experimented with nematodes that had both mutations, and the synergy that resulted far exceeded what they expected.

Rollins said gene mutations can adversely affect immune-suppression systems, so part of the goal of such experiments is to identify how much a gene can be modified to slow the aging process but without making the affected nematode prone to outside infection. It gets even trickier when modifying more than one pathway — a term used to describe the way a gene affects cells over time — but Rollins said the study results suggest that the most effective anti-aging treatments could result from how multiple, simultaneous genetic modification treatments interact with each other, rather than from any one individual mutation. 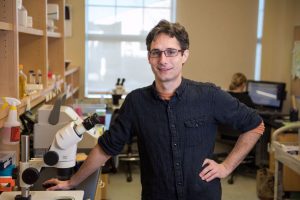 Rollins emphasized that the primary goal of the study is not just to find a potential way to make humans live longer, but to keep them healthier as they advance into old age. Cancer, dementia and other ailments often coincide with advancing age and complicate one another, he said, though they usually are treated separately. But it is possible that they could become less common among older people, he added.

“If we can reduce the rate of aging, we’re targeting these diseases all at once,” Rollins said.